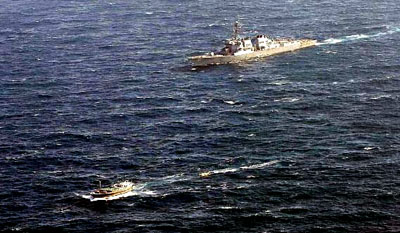 Movies and books have romanticized the idea of classic pirates, but modern pirates are anything but romantic. In 2005, nearly 300 ships were the victims of pirate attacks, down from a peak of nearly 450 in 2003. Most of these attacks take place off the coast of Indonesia, Somalia and Bangladesh. Authorities also report that Iraq is becoming a new piracy hotspot. The most common targets for modern pirates are cargo ships, tankers and container ships. The ships are most vulnerable when they're berthed or anchored.

Piracy has flourished during the last few years for several reasons:

Modern pirates use some of the same tactics as Golden Age pirates. They often attack ships from astern at night, using grappling hooks and ropes or hooks on poles to board the ship before anyone raises the alarm. But modern pirates aren't always after a ship's cargo, since selling large amounts of goods requires access to markets that will accept them. Instead, pirates take the crew's personal valuables, electronic items and other supplies. In addition, some ships keep large amounts of money in a safe to purchase supplies and compensate for exchange rates. A ship's safe can be a tempting target for pirates.

For the most part, these attacks take place relatively near shore, and the pirates use small speedboats to carry them out. But some attacks have occurred as many as 400 nautical miles from the shoreline. In these cases, authorities have suspected that smaller ships worked in conjunction with a large mother ship, carrying fuel, supplies and ammunition. A few attacks from canoes have also taken place very near the shore.

As with Golden Age pirates, modern pirates arm themselves heavily. They use guns, knives, grenades and rocket launchers. Pirates threaten and assault crew members, take hostages and maroon their victims. They may also transfer the ship's crew to the attack vessel and depart with the entire ship and its cargo. In some cases, crew members have died at the hands of modern pirates. Pirates also take advantage of current technology, monitoring communications between ships and ports to determine the best targets and plan of attack.

Unlike Golden Age pirates, who often spent their lives at sea, modern pirates typically operate from shore. The few who pursue a career in piracy rather than attacking a few random ships must have access to markets to sell their plunder. They must also have an organizational structure, weapons and surveillance equipment. Pirates who steal entire ships have to find sympathetic ports where the authorities are willing to disregard their illegal activities. In these ports, pirates re-register ships with new names and false identification, creating phantom ships to use for illegal purposes.

Brought to You by the Letter Arrrr

If you're running low on eye patches, spy glasses or messages in bottles, you might need to stop by the pirate supply store at 826 Valencia in San Francisco, California. Don't worry, you won't be supporting bloodthirsty murderers -- you'll be supporting a nonprofit children's literacy center.