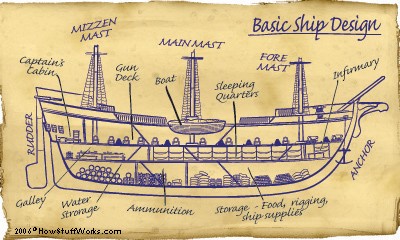 Golden Age pirates also have some notable differences from modern depictions. They generally used small, fast ships rather than immense galleons. Most used fast, maneuverable ships called sloops. Sloops could carry around 75 men and around 14 small cannons. They had shallow draughts, so they could travel into shallow water to evade or pursue other ships. Pirates in the 17th and 18th centuries also used schooners, which were American versions of sloops, and brigantines, which could hold about twice as many men as sloops.

These pirates also weren't usually after gold, silver and jewels. Their plunder consisted mainly of tobacco, rum, sugar and ordinary supplies. The concept of treasure maps and piles of wealth comes primarily from "Treasure Island" and other romanticized pirate tales. One notable exception is the pirate Sam Bellamy, whose ship Whydah sank off the coast of Cape Cod, Massachusetts in a storm in 1717. The Whydah's plunder included chests of gold and coins. National Geographic has more information about the Whydah and its treasure.

In addition, many stories and movies have depicted pirates as charming rogues or aristocrats forced into piracy through unfortunate circumstances. Pirates have been portrayed as romantic heroes, such as "The Princess Bride"'s Dread Pirate Roberts, or noble outlaws, such as "Pirates of the Caribbean"'s Captain Jack Sparrow. But pirates from every area, including the Golden Age, weren't usually noble or aristocratic. Although some followed codes of conduct and elected their captains democratically, they were still thieves and murderers. While some pirate ships were racially integrated, many participated in the slave trade by capturing and plundering slave ships.

Many people think of pirates as rich, living off the plunder of many ships. While some pirates had more wealth than merchant sailors, long sea voyages made their lives far from easy. The pirate diet often included spoiled meat, bitter water tainted with algae, and hard tack, which was like a very hard cracker that didn't spoil as quickly as ordinary bread. Even so, a ship's store of hard tack was often infested with small bugs called weevils. You can learn about hard tack and how to make your own at the Gettysburg National Military Park site.

Read Pirate Books for Free, Without Resorting to Piracy

"Treasure Island" and "Peter Pan" are both in the public domain in the United States. You can read both books for free at Project Gutenberg.