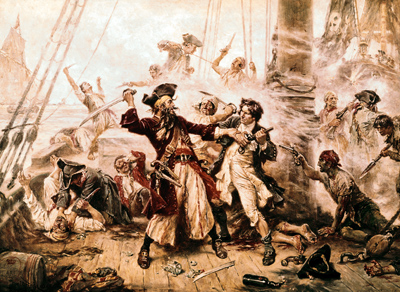 "The Capture of the Pirate, Blackbeard," painted in 1718 by Jean Leon Gerome Ferris
Image courtesy © Bettmann/CORBIS

When it came to attacking an enemy ship, pirates preferred to get up-close and personal. Pirates wanted to plunder ships before sinking them. Pirates needed to be able to plunder ships before they sank or to keep the ship rather than sinking it. This, in addition to their cannons' inherent dangerousness, made ship-to-ship battles risky. Pirates instead liked to intimidate their victims into surrendering or board the enemy ship and fight hand to hand on the deck.

The ideal pirate attack could go one of two ways. The pirates could approach their target openly, run up the Jolly Roger, and accept the ship's surrender. Or, the pirates could use smaller boats and board to the enemy ship using grappling hooks and ropes. One of the pirates would disable the ship's rudder to help prevent escape.

But not every ship surrendered peacefully, and not every raid went without a hitch, so pirates used heavy weapons when necessary. Cannon fire could disable or destroy a ship. Cannons could also fire double cannon balls or chain shot, which could damage or destroy masts and rigging. They could also fire grapeshot at the sailors. When firing at people, pirates generally tried to take out the sailor at the ship's wheel first.

When pirates successfully captured a ship, they had to deal with its crew. They could make the victims part of their own crew, kill them or sell them as slaves. Or, pirates could maroon the victims on an island, leaving them with few if any provisions. In addition, raids on ports and other settlements often involved torture, murder and kidnapping for ransom.

Pirates could be similarly violent when dealing with the crews of their own ships. Many codes of conduct listed death as the punishment for crimes like stealing or smuggling women on board. Another punishment was keelhauling, in which the offending pirate was tied to a rope and dragged under the keel of the boat. Keelhauling usually resulted in death by drowning, and the barnacles attached to the hull of the ship could rip the offending pirate's skin and clothing to shreds. Walking the plank, however, is a literary invention, not an actual pirating practice.

The Golden Age ended in the 1730s, as colonies on the coast of the Americas became more able to defend themselves from attacks. We'll look at how Golden Age pirates compare to modern pirates in the next section.

I Don't Think He's Using the Same Wind We Are

Through much of history, ships used sails and oars for power. For this reason, it may seem impossible for one ship to catch up to another -- after all, they're using the same wind. But a number of factors can affect a ship's speed, including:

Pirates and sailors had some control over all of these factors. They could periodically beach their ship and careen the hull by scraping the barnacles from it. They could also abandon, sell or store unneeded cargo. Skilled sailors knew how to get the most power from their sails as well.