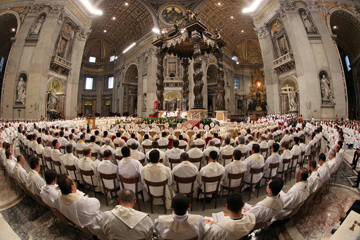 Pope Francis leads the Christmas mass in St. Peter's Basilica at the Vatican in 2013.
© ALESSANDRO BIANCHI/Reuters/Corbis

If the elected pope accepts, the master of papal liturgical celebrations certifies the acceptance by the new pope, as well as the pope's choice of name. The elected person immediately becomes the bishop of Rome, which gives him supreme power of the Catholic Church. Each cardinal elector then approaches the newly elected pope to pay homage and show his obedience to the pope.

After an election, it is tradition for the oldest cardinal in conclave to step to the balcony above St. Peter's Square and announce, "Habemus papam," which means "We have a new pope." The new pope then steps out on the balcony, addressing the world as pope for the first time, and imparts the Apostolic Blessing.

Once his inauguration is over, the new pope begins the day-to-day duties of papal responsibility. As spiritual leader of the world's largest religious following, and as the Vatican's head of state, the pope's responsibilities are vast. Here are just a few of his duties and activities:

The role of pope has evolved greatly in 2,000 years. At one time, the pope crowned emperors and carried military power. Today, the pope's secular power and duties are diminished, but the position still carries great spiritual influence as the leader of the world's largest religious sect.

For more information on the papacy, the Catholic Church and related topics, check out the links below.

As the newly elected pope accepts his new role, it is tradition for him to select a new name. This papal tradition dates to 533 and the election of Pope John II, whose birth name was Mercurius. Mercurius is derived from Mercury, a pagan Roman god. Believing that a successor of St. Peter should not carry a name belonging to a pagan religion, Mercurius chose to change his name upon his election to honor a previous pope. While some who followed John II chose to retain their original names, it soon became commonplace for new popes to choose a new moniker. The name change also symbolizes the new life that the new pope is entering as the head of the Catholic Church. Typically, the new pope selects the name of his favorite saint or a former pope whom he admires.

The Angel of Death Has One Job, and He Does It Well