Electing the Next Pope 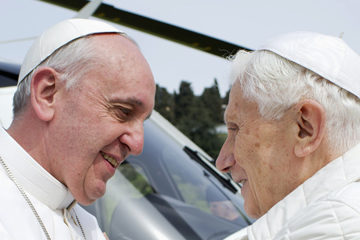 Pope Francis (left) embraces Pope Emeritus Benedict XVI as he arrives at the Castel Gandolfo summer residence on March 23, 2013. It is extremely rare for a pope to resign; the last time before Benedict was in 1415.
© OSSERVATORE ROMANO/Reuters/Corbis

A conclave begins no earlier than 15 days and no later than 20 days after the pope's death. Cardinals participating in conclave stay in St. Martha's House, a hospice inside the Vatican that has 130 rooms. Arrangements are made to ensure that the cardinals are not approached as they are transported between St. Martha's and the Sistine Chapel.

In 1996, Pope John Paul II described the complex procedures that would be used to elect the next successor to St. Peter, in an Apostolic Constitution called Universi Dominici Gregis (UDG). It is an accepted practice for popes to publish the norms that regulate the election of their successors, and popes often make small adjustments to the procedures. According to John Paul II, these changes were made "with the intention of responding to the needs of the particular historical moment."

Each rectangular paper ballot is inscribed at the top with the words Eligo in Summum Pontificem, meaning "I elect as supreme pontiff." Below these words, each cardinal writes down the name of the person he chooses as the pope. The voting cardinal then folds the ballot twice, holds it in the air, and carries it the chapel's altar. He says, "I call as my witness Christ the Lord who will be my judge, that my vote is given to the one who before God I think should be elected." The cardinal places the ballot on a plate that sits atop the ballot receptacle and uses the plate to drop the ballot into the receptacle. After bowing before the altar, he returns to his seat.

Here are the steps for the vote-tallying procedure:

After each vote, the ballots and any notes regarding them are burned. Smoke from the burning of the ballots appears over the Vatican Palace. If no pope has been chosen, a chemical is applied to the ballots in order to create black smoke when burned. White smoke signals that a pope has been elected.

The newly elected pope remains pontiff for life (although there have been occasional resignations, such as Pope Benedict XVI in 2013). His reign is referred to as a pontificate. In the next section, you will learn what the pope does during his pontificate.

The Angel of Death Has One Job, and He Does It Well