Are any superstitions universal across cultures? 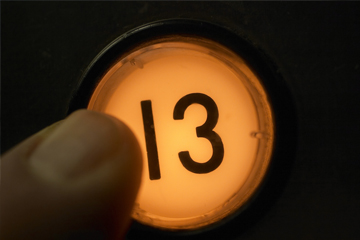 The number 13 is widely regarded to bring bad luck in Western cultures. There's even a name for this fear — triskaidekaphobia.
Trent Chambers/Getty Images

Even if you don't believe in the power of superstition, you may sometimes find yourself knocking on wood, crossing your fingers or wearing your lucky baseball cap during the World Series. Although we know, scientifically, that these things don't actually affect the outcome of anything, we still find them comforting. A 2014 study by behavioral scientists at the University of Chicago suggested that when people perform a physical action to avoid bad luck or harm, the ritual calms the mind [source: Zhang].

Superstitions span cultures, countries and centuries. Every culture has its own unique set of superstitions. However, this raises an interesting question: Are any superstitions common across cultures? We found a few. Let's check them out.

Superstitions revolving around numbers are abundant worldwide. The specific numbers may vary, but every culture has a superstition about numbers nonetheless. For example, the number 13 is widely regarded to bring bad luck in Western cultures. There's even a name for this fear — triskaidekaphobia. Other cultures have superstitions about different numbers. In China, it's the number four, because the pronunciation is similar to the Chinese word for death. Some Italians consider Friday the 17th bad luck, because the Roman numeral for 17 (XVII) can be rearranged to VIXI, which translated from Latin means "my life is over." The number nine is Japan is feared because its pronunciation sounds like the word for torture.

In many parts of the world, the appearance of a black cat is bad luck. Although this isn't true across all cultures, black cats still hold a place in global superstitions. In ancient Egypt, cats were worshipped as gods and kept in homes to bring prosperity. In Italy, if your cat sneezes, good luck is on the way. In some parts of Europe, a black cat crossing your path is good luck. However, in the New World, Puritans believed black cats were related to witches, and therefore a bad omen.

The action "knock on wood" (or "touch wood") for good luck, according to legend, goes all the way back to the pagans and has spread across the world. Believing fairies and spirits lived inside trees, they would knock or touch the tree once to request a wish, and one more time to express thanks. Or, the knocking would distract any evil spirits living there. Similar expressions to "knock on wood" exist all around the world even today — in Arabic, Brazilian, Finnish, German, Czechoslovakian, English, Greek and Finnish.

Other superstitions that cross cultures include:

Superstitions pass from generation to generation and culture to culture, as a way of preventing bad luck or bringing on good fortune. As human beings, we constantly try to control our destinies — no matter where we come from.

How Transdermal Implants Work
10 Famous Mothers
What Are 'Dibs,' and Why Do We Call Them?