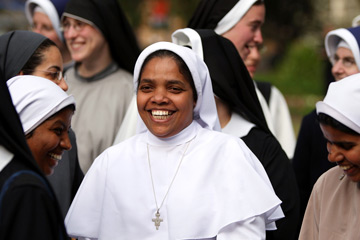 Women who remained nuns and sisters after the changes sparked by Vatican II have followed remarkable paths. Sisters work in hospitals, prisons, schools and shelters. They might work as lawyers, political activists, artists and scientists. Many of these women manage to work a full day while also completing several hours of prayer with their communities in the morning and the evening.

Today, women who seek to become nuns may do so after raising kids and pursuing a career -- once a woman's children are no longer her dependents, she is free to become a nun so long as she isn't married. But an increasing number of younger women are also reporting calls to become nuns. In both cases, these women cite a desire for something more meaningful than a secular life, a search for something "more." Interestingly, though, the younger women differ from the older ones in that they're more likely to take a traditional habit and hold traditional views than the older ones [source: Malone].

Those traditional views may serve current nuns in the United States well. In 2009, the Vatican ordered an investigation of all active sisters in the United States. Many sisters interpret this investigation as a form of punishment, given that these types of inquiries are only conducted when someone is already in the wrong [source: Schneiders]. Since contemplative nuns aren't subject to the investigation, the sisters worry that their ministries are seen as too liberal in the eyes of the Vatican.

One example of this liberalism came in 2009, when a group of nuns wrote a letter in support of health care reform, despite ambiguity about abortion coverage; the nuns told Congress to not dither about language regarding abortion, as supporting reform was the "real pro-life stance" [source: Malone]. In praising the nuns, Maureen Dowd called for a "nope," or a nun who was pope (there is some speculation that having more women in positions of church leadership might help with the church's sexual abuse crisis) [source: Dowd]. And even if nuns don't foresee ascending to the papacy, there have been whispers for decades over whether nuns and other women might be ordained to the priesthood. Currently, nuns perform all the same ministries as a priest does -- except for saying mass. The Vatican says that scripture prohibits ordination of women.

In an analysis of the investigation, Sister Sandra Schneiders compared the nature of the investigation to one chemistry professor being asked to write a report on the state of every university in the country -- individual orders are simply too broad to summarize in this manner.

Is the current investigation a hearkening back to the days of Pope Boniface VIII, whose rules about enclosure were meant to force nuns into submission and keep them out of the world? Will this affect the number of women who serve as sisters and nuns? We won't know until late 2011, when the investigation is completed. But in the meantime, let's take a look at what women go through to become a nun in the first place.