Nuns and the Second Vatican Council 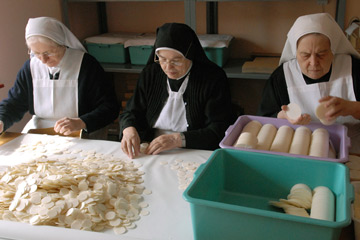 After Leo XIII recognized both active sisters and contemplative nuns as valid forms of religious life, sisters embraced their missions and became more active in ministries in schools and hospitals. In the 1950s, however, Pope Pius XII began to raise questions about nuns' habits. He had concerns about the hygiene of the long, flowing robes, and he was also concerned that the amount of time necessary to ensure clean robes would take away from nuns' prayer. He urged sisters to consider modernizing their look and dress like those in the communities they served.

The Second Vatican Council, or Vatican II, cemented this trend toward modernization. Vatican II first convened in 1962 in an attempt to contemporize and open up the Catholic Church. After Vatican II, nuns quickly jettisoned their habits, and one order even consulted the design house of Christian Dior about what they should wear next.

Following swiftly on the heels of Vatican II was the women's movement in America. Nuns who'd just given up their habits in favor of modern wear decided to give up the convent altogether, and membership in religious orders declined. With more women entering the workforce, women felt empowered to leave a place that they may have entered because it was their only career choice, or because their families had placed them there. Catholic families also tended to become smaller after Vatican II, which meant that parents no longer had a few extra children that they could "donate" to the church as a nun or a priest, a practice that was common right after World War II.

The Second Vatican Council and the modernizing of the Catholic Church allowed for more lay ministers to take part in services and ministries, so donning a habit and becoming a bride of Christ was no longer the only path to church leadership. More women elected to serve God without taking vows. As a result of all these changes, the number of nuns has plunged dramatically in recent decades, particularly in the United States. In 1965, there were approximately 180,000 sisters in the United States; by 2009, there were fewer than 60,000, and the median age for remaining nuns is in the 70s [source: Malone]. Yet we needn't write the obituary for nuns just yet; on the next page, we'll examine the type of woman that shows up at the doors of a convent today.