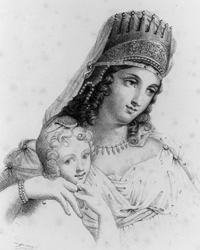 The marriage prospects of Queen Dido of Carthage were determined by politics.
Hulton Archive/Getty Images

In the centuries prior to the first millennium A.D., marriage was a good way to ensure your family's safety. By marrying a daughter off to a fellow from a nearby tribe, you expanded the circle of people who you could rely upon in times of famine or violence. Marriage came to be respected as an institution, so much so that people who didn't marry were penalized outcasts. But marriage wasn't so respected that you couldn't escape its bounds once in awhile; in fact, it was expected that men would have romantic dalliances with mistresses (or even young boys) while maintaining a marriage for purposes of child-rearing. Women were married very young, whereas men tended to be a little older, and almost all marriages were arranged.