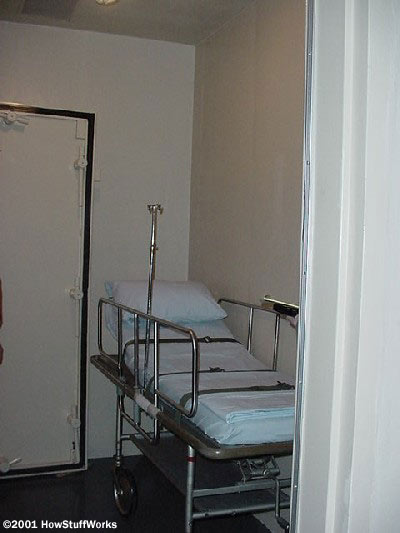 Prisoners are strapped to this gurney in the preparation room just outside the execution chamber at North Carolina's Central Prison. Once IV tubes have been inserted into the prisoner's arms, the gurney is rolled into the chamber.

Few people know when there are only a few minutes left in their lives. Those sitting on death row are fully aware of when they are going to die, sometimes to the exact minute. Most state laws regarding capital punishment include a timeline of the events that must take place in the hours leading up to execution, including when the prisoner is to be taken to the execution chamber.

Once properly dressed, the inmate is taken to the execution chamber. They either walk on their own or are restrained to and rolled in on a gurney. Inmates who walk to the execution chamber are then restrained on a gurney or table either inside the chamber or in an adjacent preparation room. The inmate is secured to the gurney or table with lined ankle and wrist restraints. A sheet may be placed over the prisoner.

The drugs are administered from inside this anteroom. Phones on the wall provide a connection to state officials who have the authority to stay the execution.
Photo courtesy California Department of Corrections

When the IV tubes are in place, a curtain may be drawn back from the window or one-way mirror to allow witnesses to view the execution. At this time, the inmate is given a chance to make a final statement, either written or verbal. This statement is recorded and later released to the media. The prisoner's head is left unrestrained -- in states that use regular windows, this enables the inmate to turn and look at the witnesses. In states that use one-way mirrors, the witnesses are shielded from view. In the next section, we'll talk about how the drugs are delivered to induce death.