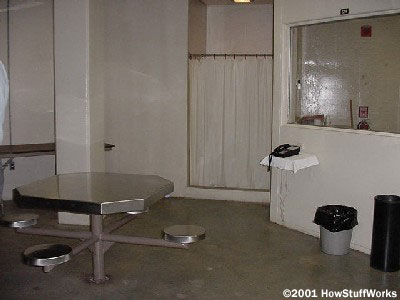 Just outside the death-watch cell at North Carolina's Central Prison. Some inmates are allowed to spend time in this area. Their last meal is served at this table.

In the final 24 hours before the execution, a prisoner can be visited by several people, including family, friends, attorneys and spiritual advisors. These visits take place in the death watch area or a special visitation room, and are halted sometime during that last day.

In the final few hours, several events take place in preparation for the execution. They do not necessarily occur in the order listed here and don't apply to every state:

Once the inmate is dressed, he or she waits in the death-watch cell with a spiritual advisor until the warden gives the signal to bring the prisoner to the execution chamber. The prisoner is brought to the chamber just a few minutes before the scheduled execution.