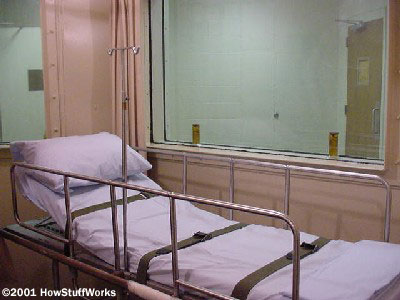 Inside the execution chamber at North Carolina's Central Prison, where lethal injection is on hold because of the argument about whether a physician involved in the procedure breaks the Hippocratic oath
HowStuffWorks.com

Unless a call is received from state officials to stay the execution, the execution proceeds as planned. While a lethal-injection machine exists, and was once used by several states, most states now opt to perform the injections manually due to the fear of mechanical failure. Usually an execution team comprises prison employees. Some states use the same personnel for every execution, while others rotate the duty among several employees.

The drugs are administered, in this order:

Within a minute or two after the last drug is administered, a physician or medical technician declares the inmate dead. The amount of time between when the prisoner leaves the holding cell and when he or she is declared dead may be just 30 minutes. Death usually occurs anywhere from five to 18 minutes after the execution order is given. After the execution, the body is placed in a body bag and taken to medical examiner, who may perform an autopsy. It is then either claimed by the inmate's family or interred by the state.