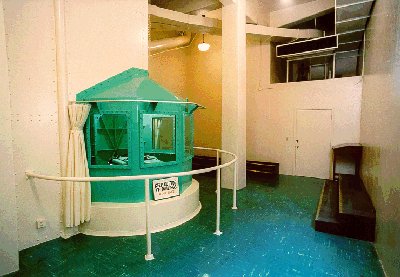 Executions in the United States were once a public spectacle, and the tradition persisted well into the first half of the 20th century. According to the book "The Last Public Execution in America," by Perry T. Ryan, the final public execution performed in the United States was that of a man in Kentucky, who was publicly hanged in 1936. Thousands of people came from several states to gather around the gallows and watch the execution. In some states, admission was charged.

Some states began enacting laws prohibiting judicial public executions in the latter half of the 19th century. Today, executions are carried out behind prison walls with only a small group of witnesses in attendance.

Every state that performs executions has legislation providing for certain people to witness them. State laws vary as to who is allowed to watch an execution, but in general, these are the people who are allowed to be witnesses:

The witness room at Central Prison in Raleigh, N.C.

Witnesses may arrive anywhere from 20 minutes to two hours before the scheduled execution, at which point they are escorted by prison guards into the witness room. Relatives of the victim are sometimes placed in a different room than relatives of the prisoner, but not always. Some execution chambers have a one-way mirror that only allows the witnesses to see the condemned. Others have a clear window that allows the condemned to see the witnesses as well. Once the IVs are inserted into the prisoner's arms, the curtain covering the window is drawn back. Some states require complete silence in the witness area.

Once the execution is over, witnesses are escorted out by prison staff. Media and families may be taken to a press area for a press conference. The official witnesses sign a document attesting to the fact that they have witnessed the execution and that it took place.