Lethal Injection in the United States 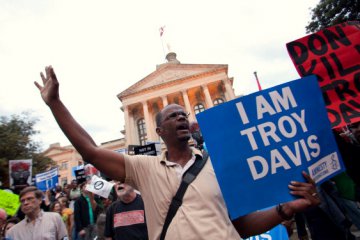 Michael Henry and other protesters for Troy Davis gather on the steps of the Georgia Capitol building on Sept. 20, 2011, in Atlanta, Ga. Davis was executed by lethal injection on Sept. 21.
Photo by Jessica McGowan/Getty Images

Lethal injection is the world's newest method of execution, and is quickly becoming the most common one. In 1982, the United States became the first country to use lethal injection as a means of carrying out capital punishment.

Lethal injection was originally proposed as a means of execution in 1888 in New York, but the state chose electrocution instead. In 1977, Oklahoma became the first state to adopt lethal-injection legislation. Five years later, Texas performed the first execution by lethal injection.

U.S. executions were briefly halted in 1972 following the ruling of the U.S. Supreme Court on the case of Furman v. Georgia. The justices decided that executions were cruel and unusual punishment and therefore a violation of the Eighth Amendment of the U.S. Constitution. In 1976, the Court reversed this decision in the case of Gregg v. Georgia. To address the "cruel and usual punishment" objections, states began looking for a more humane way of carrying out the death penalty, lethal injection being one of the methods they came up with.