The History of the Jury System 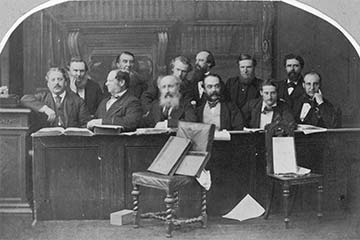 Why exactly are people randomly picked to serve on a jury? Wouldn't it be better to let legal experts decide important court cases, and a not a dozen random strangers? Who came up with this system, anyway?

The answer to that last question, like most, is the ancient Greeks. In the groundbreaking Athenian democracy created in 507 B.C.E., all court cases were decided directly by the people. Huge juries of 500 people or more were selected every day from a pool of roughly 40,000 adult male citizens to rule on everything from murder cases to neighborly squabbles [source: History.com].

The Magna Carta, penned in 1215, expressly included the right of every free man to protection from punishment without "the lawful judgment of his peers" [source: Library of Congress]. The 18th-century framers of the United States Constitution believed that a trial by an impartial jury was among the principle rights of any free society. In fact, the Fifth, Sixth and Seventh Amendments to the Constitution ensure the right to a jury in both criminal and civil cases [source: U.S. Courts].

Today, U.S. federal law states that juries must be "selected at random from a fair cross section of the community ... wherein the court convenes." Hence the computer-selected names from a list of registered voters and licensed drivers. The law further states that "all citizens shall have the opportunity to be considered for service ... and shall have an obligation to serve as jurors when summoned for that purpose" [source: Cornell University Law School].

These two components of the U.S. jury system — randomness and compulsory service — combine to ensure that a jury is a representative sample of the community regardless of race, gender, political affiliation or ability to weasel out of jury duty.

Being called for jury duty does not mean that you'll sit on an actual case. In fact, there's a good chance that you will be dismissed the same day and sent home with your free pass for a year.

When a trial requires a jury, prospective jurors are brought in and asked questions by lawyers from both sides in a process called voir dire [source: U.S. Courts]. From a large group of prospective jurors called each day, only six to 12 (a trial or petit jury) will be chosen for the trial phase of criminal or civil cases, and up to 23 for a grand jury [source: U.S. Courts]. Each side's lawyers can reject a number of prospective jurors without giving a reason. This is called a peremptory challenge, and the number allowed ranges between three and 20 per side, depending on the type of case [source: Cornell University Law School]. Since some alternates are also needed for the jury box, you have to have large pool of potential jurors to seat 12 people and two alternates. That's one reason you might find your jury summons coming quite regularly. Another is if you live in an area with high rate of no-shows. That means the court may request a lot more people to appear than it might need.

Is there a way to lower your odds of being summoned for jury duty or selected for an actual trial? Find out on the next page.