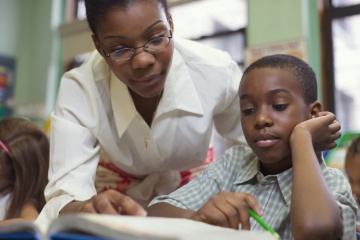 Unless you’re a teacher, there are few reasons to be the “grammar police.”
Creatas/Thinkstock

I think we can agree that everyone just loves a pedantic, patronizing know-it-all. You know, the kind of person who, when you suggest he put a coat on because you wouldn't want him to catch a cold, gives you a sad little sympathetic smile and cites several PubMed studies that detail how cold body temperatures aren't related to getting a cold. "Don't worry," he murmurs as he pats you on the head, "most people don't know that." Oh, wait. That's not someone we love. That's someone we seethe at when he's not around and are sometimes openly hostile to in their presence.

Now how do we feel about the kind of person who doesn't just cite arcane facts but who also insists we are using everyday speech or language to an unacceptable standard? The grimace-worthy term "grammar Nazi" gets thrown around pretty often. So does "grammar police." But surely we can agree that one who is so adamantly fixated on correcting your language can simply be labeled a Grammar Jerk Who Needs a Hobby.

Now that we've labeled every eager grammarphile as a loser, let's backtrack and acknowledge some hard truths. There are convincing reasons to correct one's grammar. Suppose a colleague hands you a report where "we're" and "were" are used interchangeably, and you're saving them embarrassment in a company meeting by pointing out the error. If you're talking to a non-native speaker and you're genuinely confused by their communication, it might be fair to clarify some grammar to make sure you understand the meaning correctly. But unless you're a language teacher or have been explicitly asked to help, lay off the grammar lessons in general conversation.

That brings us to why it's generally rude to correct the grammar of others. It's simply not appropriate to correct other people's behavior. Period. Full stop. It's not polite to tell anyone they're doing a bad job of, well, anything — communication included [source: Miss Manners]. One theme of being a polite person is being able to show that you are not distracted by the conventions of what's being said but are actually interested in the meaning of what's being said [source: Miss Manners]. It's extremely rude to imply to others that — far from being an appreciative audience — you were simply listening for "mistakes."

And one other thing. Grammar Jerks Who Need Hobbies should tread very, very carefully. Grammar is a notoriously fickle and changing field and prone to confusing even the most confident grammarian. Don't assume your knowledge of language is immutable. You might find yourself on the receiving end of a lesson from a Grammar Jerk Who Needs Hobbies even more than you do.