Flirting Through the Ages 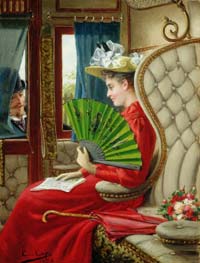 Today, we -- meaning, most Western societies -- aren't really shocked by typical flirtatious behaviors. But if a person from the Victorian era witnessed the knee-touching, lip-licking and winking that goes on today, he or she might be extremely scandalized. Flirting has gone from very prescribed sets of behaviors to off-the-cuff text and Facebook messages.

Some elements of flirting are eternal. A recent translation of the Kama Sutra, the classic Hindu sexual instruction manual, includes several ways for men to flirt successfully with women. One includes the suggestion that when a man and woman are "playing in the water, he dives underwater at some distance from her, comes up close to her, touches her, and dives underwater again" [source: New York Times]. This sounds like typical flirty behavior between kids.

An 1881 book advising young Victorian men and women on manners and etiquette includes several guidelines for courtship. First and foremost, a "gentleman should not be introduced to a lady, unless her permission has been previously obtained." Once he is introduced, he has the freedom to call on her and accompany her to "concerts, operas, balls, etc." However, a "gentleman who does not contemplate matrimony should not pay too exclusive attention to any one lady."

A proper Victorian woman "will not too eagerly receive the attentions of a gentleman, no matter how much she admires him; nor, on the other hand, will she be so reserved as to altogether discourage him." The book goes on to describe how men should only take the hand of a woman when she offers it, and that the kiss, "the most affectionate form of salutation, and is only proper among near relations and dear friends" [source: Young].

­Overt signs of interest were generally considered unacceptable on the part of both men and women. However, Victorian women could still show interest in men through very subtle cues. One way was through floriography, or the language of flowers. Different flowers represented different feelings, and they could be very complicated. Dictionaries were published so that everyone could easily understand the meanings. Here are a few basics:

­Today's teenagers surely would not bother with something as complicated as arranging the right flowers to send the correct messages. Over the years, flirting evolved from careful, measured gestures to cutting to the chase. According to a 2006 article in Time magazine, it's completely common for a 15-year-old boy to text a line like "how far have u gone" to a girl after a few days of flirtatious texting [source: Time]. Sometimes the girl replies honestly; or she might say "how far have u gone. ill tell u if u tell me." This could lead to meeting up and making out.

Face-to-face meetings often result in exchanges of e-mail addresses, IM client usernames, or Facebook or MySpace info instead of phone numbers. It's also not uncommon for strangers to meet online and ex­change flirtatious banter. But online flirters beware: in December 2007, a manufacturer of anti-virus software discovered a Russian virus that invaded chat rooms. Once in, the virus chatted with users and flirted with them so convincingly that some women shared their photos and phone numbers.­

­­ For lots more information about flirting, love and dating, try out the links below­.

There really is no such thing as a good pickup line. So don't bother trying any of these:

I seem to have lost my phone number. Can I have yours?

If I could arrange the alphabet, I would put U and I together.

Is it hot in here, or is it just you?

And the classics: "What's your sign?" and "Do you come here often?"­