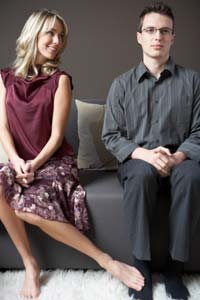 Someone's who close to you, smiling at you and touching you might be flirting.
Chad Johnston/Getty Images

How do you know when someone is flirting with you? Although it's different for everybody, there are some common signs. Here are a few clues:

Just one of these actions or even a few of them together would probably not constitute flirting. But if someone compliments you, smiles often, leans in closely and brushes your arm as he talks to you, there's a good possibility that he's flirting.

To compound the issue, there are also some differences between how women flirt and how men flirt. For example, some women bat their eyelashes or run their fingers through their hair. Men are more likely to make bold, aggressive gestures, like intense eye contact. In addition, they are more likely to flirt out of sexual interest, while women often flirt to test men's intentions, using ambiguous gestures. The Social Institute Research Centre has coined a term for these ambiguous flirting gestures, like hair touching. They're protean signals, named for the Greek shape-shifting god Proteus [source: Social Institute Research Centre]. If a woman uses these gestures and learns that the man isn't interested, then she can always play them off as not being flirtatious.

If you want to flirt, you could try any of these methods. But you have to watch carefully for the other person's reaction. If he leans away when you lean forward, or if he doesn't engage in conversation despite your best attempts, then he might not be interested. On the other hand, he could simply be shy and taken aback by your interest. Or he could think that you're just being friendly when you're actually interested in more than just being friends. How do you know for sure? There are no definite rules when it comes to flirting, because every situation is different. Flirting is just as complex and tricky as dating in general.

So although there are some obvious signs of flirting, it can still be a very messy endeavor. In a 2006 article for the Daily Mail, reporter Danielle Gusmaroli wrote about trying a method employed by a successful flirter that she interviewed:

On leaving the bar, I spot a road cleaner across the street and smile warmly. He smiles back and I hold his gaze for an agonizing four seconds, look away and (cringe) look back. He smiles appreciatively and I scuttle off trying not to laugh.

To my horror he pegs it across the road to my side. With a penetrating stare he asks: "Sorry, do I know you?" I apologize, trying to back off.

"Sorry, my mistake. I thought you were someone else." "Give me your number," he demands. I decline. He becomes angry. "You were coming on to me, weren't you?" I panic and run.

What happened? Gusmaroli was trying to flirt, but she wasn't really interested in the road cleaner. It took him awhile to recognize the flirting, and when he did, he seemed to feel like she "owed him" her phone number.

In the next section, we'll look at the science of flirting -- what's happening in your brain and body when you flirt and how flirting works in other species.

Some people confus­e sexual harassment with flirting and vice versa. The most important factor here is perception. It's sexual harassment when it leaves the person feeling offended, demeaned or violated. The bottom line is that if the object of someone's flirtation makes it very clear that the flirting is unwelcome and unwanted, but the person continues to flirt, then he or she is guilty of harassment.