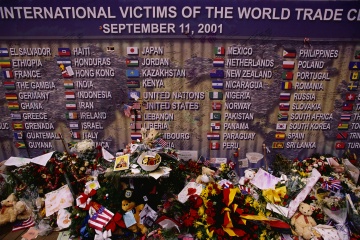 The U.S. was quick to denounce 9/11 as an act of terrorism. Drawing the line between mass murder and terrorism isn't always that straightforward though.
© Bob Krist/Corbis

You open the morning newspaper to see a story about a person suspected of committing an atrocious act of violence that inflicted multiple casualties on an innocent population.

Is this a case of terrorism or mass murder?

You're probably not sure yet. Before you can respond, you have to ask some questions about the crime. You might ask about the suspect's motivations. Was the person acting on a religious ideology? For a political purpose? If so, are some ideologies or politics considered a bigger terrorist threat? If the person in our hypothetical story said, for instance, he was angry about abortion politics, is that a terrorist action or that of a lone mass murderer?

Next, what weapon(s) was used? A gun? Ricin? A bomb? Do any of those items lead you to make assumptions about the incident being classified as terrorism or mass murder? Sometimes it seems we're starting to use a more simple -- albeit flawed -- way to distinguish among acts that result in multiple people dead. If someone used a bomb, it's terrorism. A gun? Mass murder.

Of course, that's not an effective methodology, nor is it a fair assessment to mete out punishment. As we'll see, the definition of terrorism has evolved to describe the motivations behind the act, not the actor.

The FBI borrows the Code of Federal Regulations definition that defines terrorism this way: "the unlawful use of force and violence against persons or property to intimidate or coerce a government, the civilian population, or any segment thereof, in furtherance of political or social objectives" [source: Department of Justice]. On the other hand, according to the FBI, a mass murderer kills four or more people during the same incident, without a significant time lapse in between. (Unlike, say, a serial killer who would take time between murders.)

That sounds straightforward enough, right? Mass murderers will kill indiscriminately for no political/religious/ideological purpose, and terrorists might take the same actions, but with the intent of saying that they are a protest of intimidation of a government or people.

Except, of course, many mass murderers really do think their actions are a protest or do intend to terrorize a population. So let's dive in more and explore some incidents where the definitions are harder to establish.

A Matter of Weapon, Intent or Some Combination Thereof?

So it appears that terrorism and mass murder are sometimes distinguished with an "I know it when I see it" assessment. And when we see the weapon being used, the public often has an easier time deciding who's a terrorist and who's a rogue: Guns are for mass murderers. Bombs -- or "weapons of mass destruction," as the pressure-cooker weapons constructed in Boston are referred to in the charges filed against the suspect -- are the domain of terrorists.

That's the idea that floats around the general population, anyway. As we saw, the U.S. government has clear-cut definitions for both terms, so no problem separating the two, right? Uh, not exactly. Remember terrorism is defined as unlawful force and violence used to "to intimidate or coerce a government, the civilian population, or any segment thereof, in furtherance of political or social objectives."

Let's take, for example, the 2011 Arizona shooting that injured, among others, former U.S. Rep. Gabrielle Giffords and killed six others. Shooter Jared Lee Loughner was diagnosed, at one point, with schizophrenia, and although there was some discussion of his interest in conspiracy theories, it doesn't appear he was acting on a political or social agenda [source: Follman]. That being said, a targeted shooting of a political figure at a public event certainly could be seen as an attempt to intimidate a government or civilian population.

Examining the Giffords case, ask yourself this: If Loughner had used a homemade bomb -- or even anthrax or ricin -- to target a politician and cause collateral damage, would we (or media outlets, or the government) call him a terrorist?

On the other hand, were the Tsarnaev brothers' acts that much more ideologically motivated than someone like Nidal Malik Hasan, a U.S. Army psychiatrist charged with killing 13 people and wounding more than 30 during a shooting at Fort Hood in 2009? Hasan had reportedly opposed the wars in Iraq and Afghanistan and had attempted to contact al-Qaida [source: Lapidos]. Hasan, however, is slated to be tried in a military court without terrorism charges in 2013.

Internationally, there's also a struggle to define terrorism in relation to mass murder. Anders Behring Breivik, who killed 77 people and injured 242 others in a series of bombings and a mass shootings in Norway in 2011, was charged with committing terrorist acts [source: BBC News]. However, the planning of the attack wasn't regarded as a terrorist action at the time because before 2012, Norway stipulated that more than one person had to be involved for something to be considered a terrorist plot [source: Criscione]. Essentially, Breivik planned a mass murder and then carried out a terrorist act.

So what's the difference between mass murder and terrorism? For now, there seems to be tacit (if not explicit) international agreement that terrorism is spurred by a specific ideology or political motivation, while mass murder is a more indiscriminate act of violence against an innocent population. While there is certainly overlap, we can usually distinguish the two based on the motivation of the suspect.

Author's Note: What's the difference between mass murder and terrorism?

The most useful thing to remember when trying to distinguish between terrorism and mass murder is that there is no definitive answer. Not in the United States legal system, not in many other nation's laws and not in any international sense. Obviously, there's overlap in the definition of terrorism and mass murder. But how we punish people is affected by the charge brought against them, so it's an overlap that might become increasingly important to define.

Women Have Been Vanishing for Decades on Canada's Highway of Tears
UCLA Report: Murder Rates Shorten Life Expectancy Among Mexican Men
'Made in the USA' Behind Bars: Is Prison Labor Really 'Slave Labor'?