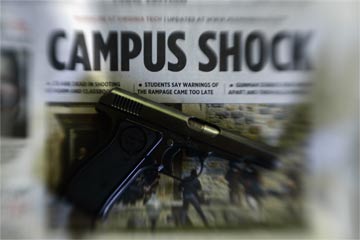 Overreporting on a horrific crime can play straight into a perpetrator's desire for recognition and inspire copycats. How can media outlets avoid those scenarios while recognizing the public's desire for news?
Robert Sullivan/AFP/Getty Images

Sandy Hook didn't look like Sandy Hook, or at least the Sandy Hook that I know. I once worked in Newtown, Conn., as a reporter for the local daily newspaper. I lived (still do) 10 minutes from the center of Sandy Hook, a red-brick section of Newtown complete with antique shops, eateries, offices and 18th-century homes. Sandy Hook is where I made friends, quaffed beers and fished the Pootatuck River.

On Dec. 15, 2012, I didn't recognize the place. As I drove down Glen Road, which curves around the rushing Pootatuck, I spied CNN's Wolf Blitzer, his white beard awash in lights, talking into a microphone. Wolf wasn't the only reporter in the "Hook." TV satellite trucks from Canada, New York City and environs unknown crowded Church Hill Road, Sandy Hook's main thoroughfare. Reporters from Japan, Germany, France and goodness knows where else, begged for on-camera, on-air, on-the-record interviews. "How do you feel?" "Did you ever think a thing like this could happen here?"

Chances are you know what drew the media to this obscure little burg. Evil visited the day before as a crazed boy gunman murdered 26 people, including 20 children, at Sandy Hook Elementary School. Hours later, the media began its nonstop, carpet-bombing coverage of the tragedy. Eventually, Blitzer et al. left. On to another story. I knew the drill well.

A month later, 3,000 miles (4,828 kilometers) away, a 16-year-old boy took a gun into a Taft, Calif., high school and shot a classmate. When I read about the crime, I couldn't help but wonder whether the 24/7 Sandy Hook media coverage had trigged something in the student's head that January day, causing him to pull the trigger. Was this a copycat crime? Was the Sandy Hook news coverage to blame for the Taft shooting? We'll never know.

That's the problem linking so-called copycat crimes to news coverage. Most studies cite anecdotal evidence that news reports of sensational crimes generate similar types of assaults in the days and weeks after.

At first, he was a nobody, a young everyman. Like most of us, he walked the streets unnoticed, another pedestrian on life's sidewalk. But on a July day in 2012, the accused gunman became somebody when he walked into an Aurora, Colo., theater and opened fire, killing 12 people and wounding 58 others. Within days, the world knew all about James Holmes. Reporters described him as a loner, a graduate-school dropout and a former high-school soccer player. They probed into every dark corner of Holmes's life trying to learn as much as they could about the alleged shooter.

Was all the attention inadvertently inspiring the next person to commit a similar atrocity? At the time, many critics thought so. "How often must we see the alleged murderer's name in print and his face shown in photographs from happier times?" asked James Alan Fox, a world-famous criminologist, in a blog post. He continued, "It is perfectly reasonable to shed light on the tragic event without a media spotlight on the alleged assailant. It is shameless, if not dangerous, to transform an obscure nobody into an infamous somebody who may be revered and admired by a few folks on the fringe."

Let's get something straight. Copycat crimes are not a 21st-, or even a 20th-century, invention. The first such crimes were documented during the late 19th century, when sensational cases, including the Jack the Ripper murders, riveted the world's attention [source: Helfgott]. In the 1920s, concern that media outlets were in some way influencing people to commit crimes sparked investigations and censorship drives [source: Surette].

In 2004, Loren L. Coleman, in the book "The Copycat Effect: How the Media and Popular Culture Trigger the Mayhem in Tomorrow's Headlines," argued that the news media encourage others to imitate destructive behavior. The media's "if it bleeds, it leads" attitude, Coleman writes, leads to copycat killings. "The media are driven by stories of death," Coleman writes. "The media, like a monster octopus looking for its next victim, searches around trying to figure out from what hole its next meal will come from. It is this kind of media atmosphere that allows the copycat effect to thrive ... " [sources: Coleman, Kopel].

In the world of commercial journalism, the "if it bleeds it leads" mantra is all too common. The greater the carnage, the greater the coverage. It's the nature of news, a price, I suppose, we pay for living in a free society. Hence, Wolf Blitzer, Brian Williams and Matt Lauer descend on a tiny New England community that no one had heard of before. Experts say that such overreporting plays straight into the perpetrator's tendency for recognition.

You Are What You Read?

In the 1770s, there was a spate of suicides by young men after the publication of Johann Wolfgang von Goethe's 1774 novel "The Sorrows of a Young Man." Dozens of men shot themselves with an open copy of the book on their desks [source: Helfgott].

The Nature of Copycats

So, we are left with the nagging question: Is the connection between news and crime real? The answer is a resounding "maybe." Research into the phenomenon is limited because it's difficult to link the two. For a copycat crime to be real, the perpetrator has to have been exposed to media coverage of the initial crime, which is often hard to document. Moreover, the copycat criminal has to have incorporated major elements of the first assault, such as the age or type of victim, method and even the motivation, into the copycat crime. To make matters more complicated, a copycat crime might be erroneously labeled, while a true copycat crime might go unnoticed [source: Surette].

Still, you can't ignore the legion of anecdotal evidence to suggest there is a connection. Consider the uptick in suicides among young women in 1962 after the death of Marilyn Monroe. Experts believe the 2002 Washington-area snipers might have encouraged similar crimes in Ohio, Florida, Britain and Spain. In addition, a series of school shootings in the late 1990s ended in 1999 with the massacre at Columbine High School in Colorado. The shooters had many things in common [source: Farhi].

Such stories are just the tip of the murderous iceberg. Researchers seem to accept the link between news coverage and copycat killings. "Some people do get ideas that they hadn't had before and are willing to try them out," Howard Zonana, a Yale professor, told the Washington Post. "We're all susceptible to [media] influences, to a degree. It could be that someone is disgruntled enough and sees that he can go out in a big blast of fame."

One researcher, Dr. Park Deitz, says, on average, widespread news coverage of a mass murder causes one more mass murder within two weeks. He says some people sit, watch and read the news coverage "with guns on their hip and a hit list in their mind." Deitz says they feel a special kinship with the perpetrator and conclude that similar action is the solution to their own problems [source: Chivers].

For their part, journalists say putting mass killers under a microscope helps society by pointing out what the murderers had in common. News coverage also can serve as a vehicle for change, as was the case in the 2007 Virginia Tech shootings. Coverage of the carnage exposed flaws in Virginia's mental health system. Columbine made teachers, counselors and school administrators more aware of troubled students [source: Farhi]. Sandy Hook has forced us all to relook at gun laws and mental health issues.

So what's a society to do? Some say the media should police itself to reduce the sensationalism of the carnage. Stop the catchy nicknames and music. Stop putting the alleged murder's name in print and refuse to show his photograph. Reporters should write and broadcast stories that promote healing and understanding.

Sociopaths read the newspaper and watch TV news all the time. It's up to responsible journalists to be mindful of what they write and say when they cover a mass killing.

When a tragedy, such as the Sandy Hook shootings, occurs only miles from your doorstep, the emotions it engenders are raw and brittle. Such was the case in my small section of the world in December. Years ago, I would have relished being at the scene of the crime gathering facts and rushing them into print. That's the job of the journalist, after all. And that's what I am. Now, years removed from the daily grind of newspaper work, I don't see that attitude as healthy. Perhaps all journalists should step back when covering such tragedies. They need to know their words and images have a huge impact.

When Is — and Isn't — Crime Considered Terrorism?
The Backstory on Backpage.com, the Adult Classifieds Site That Got Shut Down
How the Judicial System Works