Do We Seek Out Shows That Validate Our Beliefs? 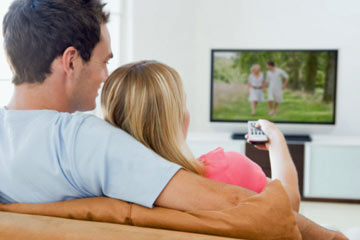 Most of us like to think we're smart enough to understand the difference between TV and reality.
iStockphoto/Thinkstock

Most of us like to think we're smart enough to understand the difference between TV and reality. The good news is that we're mostly right: Participants in more than one study have described television love stories as "depicting an unrealistic view of relationships based on passion, adventure and exotic situations" [source: Osborn]. But even as we recognize that many TV relationships are romanticized and idealized, we prefer the notion of passion and romance to the rational, "common sense" relationships that we condone in real life [source: Osborn].

Researchers have even demonstrated a possible link between frequent TV viewing and unrealistic expectations about pay, workplace relationships and other working conditions. It seems that viewers who watch the most TV are more likely to overestimate the kinds of salaries, perks and benefits that might be extended to a new hire, and underestimate the level of experience or education required for certain professional occupations [source: Waldeck].

Of course, not everything is rosy in TV land. Whether daytime or prime time, scripted or reality, in some television universes, everyone cheats, small misunderstandings become huge blowups, and gossip and pettiness reign. (We call these shows "dramas" for a reason!) One study explored the role of television in shaping viewers' attitudes toward marriage and found that those who watched the most TV were more likely to have negative views toward marriage. The researchers hypothesized that because viewers saw so few depictions of happy marriage on TV, they may have begun to question it as a way of life [source: Osborn]. Another study found that college students who watched the most reality dating programs were more likely to express negative attitudes toward dating and embrace stereotypes about dating and relationships [source: Zurbriggen].

So what's the verdict? Has television really changed our real-life relationship expectations? While several studies point toward a link of some kind between heavy TV viewing and unrealistic expectations about romantic, family and professional relationships -- particularly for younger viewers with more TV experience than real world experience -- researchers stop short of establishing cause and effect, instead using terms like "association" and "correlation" to describe the interaction between our TV viewing habits and our attitudes toward relationships [sources: Osborn, Segrin, Waldeck and Zurbriggen].

The bottom line? We may never know whether television in fact shapes our relationship expectations, or whether we simply gravitate toward those programs that reinforce our own fantasies about love, work, family and friendship.