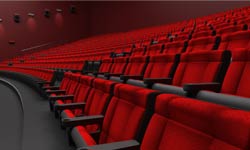 As home theaters get more advanced, cinemas may have difficulty filling seats.
©iStockphoto.com/kutaytanir

In 2010, the United States domestic box office raked in a whopping $10.5 billion from more than 500 movies [source: Box Office Mojo]. That's almost $1 billion more than theaters made in 2008, despite the fact that fewer movies found their way to the silver screen. The point is, the movie industry still makes incredible money today, despite all the modern technology that makes the living room movie experience better than ever.

However, even with all that revenue under its belt in 2010, not everything is looking good for the theater industry. Tickets sold have been down year-over-year every year since 2003 with two exceptions: 2006 and 2009 [source: Box Office Mojo]. The box office is making more money only because of rising ticket prices, which poses an important question: How long can they keep it up?

As ticket prices gouge our wallets for larger helpings of cash, home theater technologies grow all the more affordable and sophisticated. Who wants to pay $18.50 to see a 3-D movie (which is what you'll pay in a city like New York) when they could own their own 3-DTV [source: Time]? Who wants to pay $8 to see a normal movie -- the national average ticket price in 2011 -- when they could subscribe to Netflix for an entire month for that same price [source: Box Office Mojo]? Those are just a pair of the 10 TV technologies making movie theaters obsolete. If the box office doesn't watch out, these inventions will keep sending those ticket sales down, down, down.