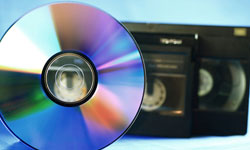 Image Gallery: Home Theaters Since DVDs were invented, they've had a variety of effects -- both positive and negative -- on the film industry. See more pictures of home theaters.
iStockphoto/Thinkstock

Since digital versatile disc (DVD) technology was first developed, the rise of the information industry has made its mark on everything from music to television to film.

Every sector of the media industry has seen its business change in ways that were unimaginable just a few decades earlier -- from the ways in which entertainment is produced and marketed to the ways it generates revenue. The business effects of the digital format have had a lot of interesting effects on the creative aspects of our media, as companies are forced to change the way they look at the creative process and seek new ways to fund their projects.

Let's take a look at the effects of the DVD -- and the digital revolution it helped to bring about -- on the film industry.