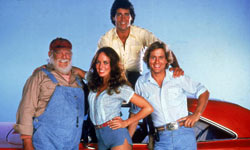 In the 1980s, "The Dukes of Hazzard" was one American show popular among Europeans. See more pictures of TV shows.
Fotos International/Getty Images

We've come a long way since the days of "Howdy Doody" and vacuum tubes. Now, it's Snookie and broadband. Some American shows have gained an almost cult-like following abroad, thanks in part to the Internet and satellite technology.

In the 1980s, Europeans and others loved watching "Dallas," "Dynasty" and "The Dukes of Hazzard" [source: Pfanner].Then things changed: Foreigners weren't watching that much American television. Five or six years ago, it was hard to find any U.S. television series on the prime-time schedules in Europe, or anywhere else for that matter. In recent years, however, American television shows have become immensely popular. But, most Europeans still have a rather dim opinion of the United States [source: Pfanner].

Part of the reason might be because of what they're watching. In March 2011, U.S. Secretary of State Hillary Clinton bemoaned that U.S. television was giving people around the world a distorted view of Americans. "I remember having an Afghan general tell me that the only thing he thought about Americans is that all the men wrestled and the women walked around in bikinis because the only TV he ever saw was Baywatch and World Wide Wrestling," she said [source: Fung].

Think what you want about the quality of American TV, but there's no disputing that some of America's No. 1 exports are its TV programming. Go to the next page to find out what some of the top American shows are, and were, overseas.

Let's just start with the most popular American TV show ever -- "Baywatch." At its peak, the show starring Pamela Anderson and David Hasselhoff was broadcast in 142 countries. More than 1 billion people have watched the show [source: Britannica].

"Baywatch" made its debut in 1989, then was canceled after one season. Hasselhoff and his partners bought the rights to the show and resurrected it as a syndicated series in 1991. One of the reasons "Baywatch" got a second chance at life was because of its overseas popularity. The show went off the air in 2001. However, it made Hasselhoff one of the most recognizable American celebrities in the world. Hasselhoff's European fans helped launch his music career in the late '80s [source: Biography].

Wrestling, courtesy of WWE, is seen in more than 500 million homes around the world [source: WWE.com].

Fans of "The Office," with Steve Carell as the boss from hell, know their favorite TV show is based on a popular British series of the same name starring Ricky Gervais. So, when the American version of "The Office" attracted 11.2 million viewers during its first show in 2005, it shocked many in the industry. Most executives had suspected it would fall flat because of its, well, British-type humor [source: Roberts].

Since then, the show has become an international sensation and has been copied several times. The French call their "Office," "Le Bureau;" while those living in Quebec refer to it as "Le Job." In Germany, they call "The Office" "Stromberg." The Chileans have their own version of the show, too [source: Chen].

One of the reasons for the show's success abroad was its popularity on iTunes. In 2006, NBC made the show available for download and it quickly topped the download chart. Other American networks soon began making their shows available on the Internet [source: Roberts].

Since 2008, "House" has been top U.S. TV export in Europe. The show made its debut in 2004 on Fox. The storyline centers on Dr. Gregory House, played by Hugh Laurie, an off-the-wall physician who clashes with his colleagues at the fictional Princeton-Plainsboro Teaching Hospital in New Jersey.

So far, NBC Universal has licensed the show to 250 territories around the world. In France, the show averaged 9.3 million viewers during the 2009 season, up 30 percent from 2008. The Italians think House is bellissimo, with 4.7 million viewers. On average, 4.2 million Germans watch each episode. The show is also popular in Poland and the Netherlands [source: Adler]. 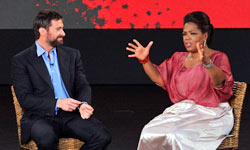 For more than two decades, "The Oprah Winfrey Show" has been wildly popular, not just in the United States, but internationally. But even the daytime diva has had her problems. For the past several years, the show has been struggling in the ratings both in the United States and abroad. When Oprah announced in 2010 that she was stopping production, her ratings crashed to an all-time low [source: Harris].

The trend has been playing out for the past few years. In 2008, Oprah's numbers dropped by 7 percent over the previous year, from 7.8 million to 7.3 million viewers a day [source: Cockroff]. Despite her sagging ratings, Oprah is still immensely popular abroad. She has a very loyal fan base among women. Her guests, such as British singing sensation Susan Boyle and Bollywood film stars, have always given The Oprah Show an international flavor. "Oprah" airs in 156 countries, including such far-off places as Niger, Malaysia and Vietnam [source: oprah.com].

"The Cosby Show" skyrocketed to popularity almost immediately after it began airing in 1984. Starring comedian Bill Cosby, the show ran for eight seasons on NBC. It featured Cosby as the patriarch of the Huxtable clan, an upper-middle class African-American family living in Brooklyn. The show was a mega-hit mainly because it shattered the stereotypical image of African Americans on television.

Although the show was groundbreaking in the United States for its portrayal of African Americans, it was also an international success. During its run, "The Cosby Show" constantly topped the ratings in Canada, Australia and New Zealand [source: Edgerton]. The show also altered international television syndication proving that comedy was marketable overseas, and made its distributor, Viacom, a TV marketing powerhouse [source: Havens].

Prior to "The Cosby Show," overseas audiences balked at viewing most American sitcoms. But Cosby changed all that. Estimates suggest that "The Cosby Show" earned more than $100 million in international syndication revenue. While impressive, it was far below the $1 billion the show earned in domestic syndication [source: Edgerton].

As many as 1 billion people around the globe have watched at least one episode of "I Love Lucy" [source: Edgerton].

The hottest TV show in Russia is about a shoe salesman with a mouthy wife and big hair. Oh, and let's not forget the two incorrigible teenagers. Sound familiar? "Married with Children," which satirizes middle class life in the United States, is astoundingly popular in Russia. How popular? Well there's an authorized version of the show with a Russian cast. The Russian version is very well-liked among younger viewers, and the cast are household names [source: Levy].

America's "Married with Children" ran from 1987 to 1997. Its Russian counterpart, "Schastlivy Vmeste," which means "Happy Together," takes place in the Russian city of Yekaterinburg instead of Chicago. The names of the two main characters (Al and Peg Bundy) are Gena and Dasha Bukin. Instead of railing on American middle class life, the show centers on the lives of a Russian middle class family [source: Levy].

Russians began watching sitcoms, both foreign and domestic, during the economically distressing times of the 1990s when the nation was on the verge of economic ruin. The shows did not do well. Instead, Russians turned to Latin American soap operas. Now, the situation comedy has a wider audience, mainly because the Russian economy has ticked up. "The Nanny" and "Who's the Boss" are also popular there [source: Levy].

The Fraggles Rocked the U.S.S.R. 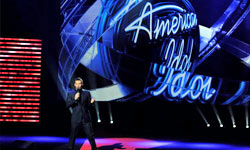 Imitation is the sincerest form of flattery, or so the old saw goes. If that's the case, then the creators of "American Idol" must be thrilled. "American Idol" is the king of knockoffs. Many shows, including ABC's "The One," and Bravo's "Going Platinum," have been inspired by Idol [source: Powers]. Yes, we know, the show itself is a knock off from the British "Pop Idol," which is itself a knockoff from the Australian "Popstars." But that's beside the point.

"American Idol" is shown in 100 countries. With the exception of Canada, where it is broadcast live, most people view "Idol" on tape-delay [source: NZ News]. Yet it doesn't seem to diminish the show's popularity. In Vietnam, "Vietnam Idol" is a tremendous hit, and has been since 2006. "Vietnam Idol" is a kinder, gentler version of its American counterpart. Instead of offering snide and sometimes hurtful criticisms, "Vietnam Idol" judges try to give the contestants constructive feedback [source: VietNews].

On April 1, 2011, just three weeks after a tsunami devastated Japan and set off a nuclear nightmare at the Fukushima Daiichi Nuclear Power Station, Tokyo TV pulled the final season of "24." Officials for Tokyo TV pulled the show because its storyline features nuclear radiation. TV executives said the subject was inappropriate considering the current situation. Instead, the TV station will re-run seasons one through seven [source: Blair].

The news was upsetting for many Japanese who are fans of the show and its hero Jack Bauer. Played by Keifer Sutherland, Bauer has fought nuclear threats, suicide bombers and kidnappers. Sutherland is so admired in Japan, and so identifiable with his character, that when he visits, the Japanese media address him as "Jack" [source: Betros].

"24" is so accepted in Japan that on Jan. 1, 2011, Japanese TV aired the first seven seasons consecutively for a week, placing it in the Guinness World Records for the longest running on-air time for a television program. In addition, Fox ran a campaign in which viewers could win 100,000 yen, or nearly $1,200, every hour [source: Betros].

Are the women of Wisteria Lane America's new secret weapon in the fight against terrorism? According to a U.S. State Department cable unearthed by Wikileaks, hit TV shows such as "Desperate Housewives" are better at persuading Saudi youth to reject violence than millions of dollars of U.S. propaganda. The shows are broadcast uncensored in Saudi Arabia [source: Daily Mail]. In 2008, "Desperate Housewives" had an international TV following of 61.5 million viewers, outdistancing such hits as "Monk" and "Ugly Betty" [source: West]. 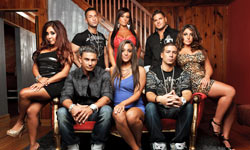 MTV premiered its hit series "Jersey Shore" in 2010 in more than 30 countries.
MTV

For better or worse, Nicole "Snookie" Polizzi is going global. She and the other stars of MTV's hit series, "Jersey Shore," are just beginning to test the international waters, which seem to be as inviting as the coast of The Garden State. MTV executives believe that the spray-tanned, party loving cast members will be big hits overseas.

Although Tuscany and Paris are a long way from Seaside Heights, MTV execs are pulling out all the stops to make sure the show -- featuring Pauly D, Mike "The Situation" Sorrentino, JWoWW and the others -- becomes a big international hit. One of the overseas print ads for the Shore goes something like this: "Muscle + gel + tanning bed = sex." There's also an international TV ad that shows a skinny man and a bikini-clad woman blowing up water toys that ultimately reveal hot bods and six-pack abs (read: The Situation) [source: Stetler].

"Jersey Shore," with its faux-Italian roots, has such a following that several production companies are creating various versions focusing on Americans of Israeli, Iranian and Korean heritage. As for MTV, it premiered the show in 2010 in more than 30 countries, and it's already No. 1 among 18- to 24-year-olds in Mexico and Colombia [source: Alston].

In case you haven't been watching, the "Jersey Shore" cast will spend part of the next season in Italy. In Venice, the cast was reportedly mobbed by young Italians shouting the show's catchphrases in broken English. The cast often uses such phrases as "gym, tan, laundry," and "grenade-free zone." Hundreds auditioned for roles as extras [source: Alston].