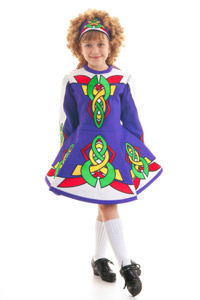 Irish dancing is unique and exceedingly popular throughout the world. Irish dancers are often recognizable thanks to their fancily colored, embroidered dresses.
iStockphoto/Thinkstock

Irish culture is steeped in song and dance. Before tourism to the island began booming, in Irish pubs it was common for people to break out in song, and every person in the pub would take a turn singing. In modern (and much more touristy times), these are typically staged performances manufactured for the benefit of foreign visitors.

But traditional Irish music has an actual definition, and no offense to Bono, but it might not include his band. In 1954, the International Folk Music Council set rules for traditional Irish music. Folk music, for example, must display evidence of connecting the present with the past, and must be alive in the community.

That connection is very much on display, thanks in part to a resurgence in traditional Irish music in the 20th century. This renewed interest came about in large part thanks to the country's growing sense of independence and identity.

Traditional music in Ireland, whether it's contemporary or much older, blends elements and instrumentation from other cultures into a distinctly Irish feel and sound. It often embraces English music-hall ditties, and draws in ballroom and polka compositions and sounds, too. Ebullient fiddles contrast with mournful bagpipes. Piano, mandolin, guitars and bouzoukis (a type of lute) add traditional Irish flavor to songs old and new.

And of course, music and singing would be incomplete without an Irish dance. There are several styles of Irish dance, including set dancing, step dancing, and ceili (or social) dances. Ceili dances may include anywhere from two to 16 dancers, often at high-speed, and in a social setting, much like American square dancing.

Riverdance aside, non-natives are often most familiar with Irish step dances, which often feature rapid food movements and patterns that can be danced in limited physical stage space. These are often solo dances and include jigs and reels.

Dancers might wear hard- or soft-soled shoes for these kinds of step dances. In the 1800's, hard shoes often had wooden heels and toes that made loud clicks as the dancer moved, similar to tap dance shoes. These days, hard shoes use mostly fiberglass to create their rhythmic clicks.