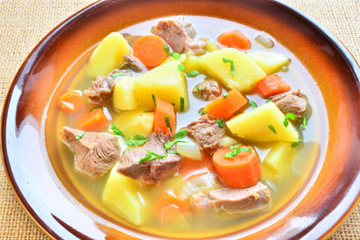 It may seem altogether too obvious or stereotypical to say that Irish food begins and ends with the potato, but in many ways it's simply true. The circle of life in Ireland has, at least since the 1600s, been less circular and more tuberous in shape.

England's colonial rule of Ireland left many Irish landless, powerless, and impoverished. As the 19th century dawned, poor Irish were only getting poorer and were forced to subsist on crops that would grow in the least desirable soils. That would be the potato, which flourished throughout the country.

And that’s why so many traditional Irish recipes lean so heavily on this particular plant. Many families would make simple soups and stews, which contained potatoes as their primary caloric content. Those recipes include colcannon(a mixture of potatoes and cabbage), boxty (potato pancakes), champ (green onions and mashed potatoes ) and many other potato-based concoctions. They supplemented those foods with oats, barley, bread, salted fish and milk.

There are many other dishes attributed to Irish traditions, including Dublin coddle (pork sausages), soda bread, bacon and cabbage (not corned beef and cabbage, which is more American than Irish), nettle soup and spotted dog (a type of bread). Northern Ireland, with its heavier British influence, has a few traditions of its own, such as the Ulster fry. The Ulster fry is traditionally made up of an assortment of fried foods, such as bacon and eggs, soda and potato bread, sausage, white or black pudding, and other cardiologist-disapproved foods.

In 1845, a swiftly-spreading fungus began destroying Ireland's potato plants, and by 1846, the Great Potato Famine was in full swing. Around 1.5 million people died of starvation, and over a million more fled the country to many parts of the world, taking their dietary traditions with them [source: History Place].

On the next pages, you'll see that the Irish also exported more than food sense. They also spread awareness of traditional Irish dress, song and dance.