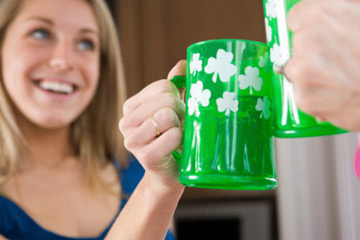 The Irish have a reputation for being hard drinkers, but that stereotype sometimes overshadows the country’s significant accomplishments.
Jupiterimages/Getty Images/Thinkstock

The Irish are the subject of some of the most lasting and clichéd stereotypes. In their long history, they’ve been painted as weak and submissive, lazy, uneducated, helpless, and reliant on the kindness of others for their own survival [source: The Society Pages]. As with so many aspects of the human experience, there’s a lot more to the Irish than overgeneralized negative characteristics.

In the diaspora that occurred during the Potato Famine, many of the Irish were pinned as unmotivated and alcoholic, in the United States especially. But the new arrivals struggled just to survive. They competed for low-wage jobs while living in unimaginable squalor. In cities like Boston and New York, they arrived nearly penniless. And they were targeted by unscrupulous landlords who overcharged the immigrants and jammed them into filthy, unsanitary houses with dozens of other impoverished and unemployed souls [source: History Place].

Sixty percent of Irish children born in Boston during the Famine died before the age of six. And hardier adults who managed the trip across the ocean on average lived only about six years before perishing [source: History Place].

The Irish were also stereotyped as drunkards [source: Gershon]. After suffering at the hands of colonial overlords and famine, perhaps it’s no wonder that sometimes they turned to alcohol to drown their sorrows. Even today, Ireland has high per capita alcohol consumption. A WHO report showed that Ireland had the second-highest rate of binge-drinking in the world, just behind Austria. However, when alcohol consumption is looked at on a per capita basis, Ireland comes in at No. 21. Belarus and Moldova are the top two [source: World Atlas].

Ironically, however, as the rest of the world has pegged St. Patrick's Day as a reason to imbibe, those who actually live on the Emerald Isle often celebrate in a much more reserved way. For the faithful, it's a religious day, and as recently as a generation ago, pubs were ordered closed on this day. As Irish culture has continued to spread globally the government has encourage a merrier (and often alcohol-fueled) atmosphere in cities like Dublin to encourage evermore tourism.

The rest of the world revels on St. Patrick's Day, and often in Irish culture in general. And the Irish have certainly created a more positive public image, too. These days, high-tech companies make a point of establishing businesses in Ireland to tap the skilled workforce. And tourism remains a booming business, to the tune of $4.3 billion a year [source: Tourism Ireland].

So for all of the traditions the Irish have established, one may stand out the most -- they've developed the ability to survive and thrive no matter the conditions. Maybe they finally found that leprechaun's hoard after all.