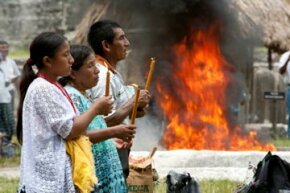 Few countries in Central America can claim as diverse historical beginnings as Guatemala, an area about the size of the U.S. state of Tennessee (42,144 square miles or 109,152 square kilometers). The Republic of Guatemala is home to the Mayan Empire, one of the most well-known and well-respected civilizations in the world. The Maya Indians lived in most of what is now Central America and made their way to Guatemala as early as 2400 B.C. They built massive pyramids and temples, crafted the art of writing through hieroglyphics and developed astronomy. They also left a timeless legacy for Guatemalans [source: Latham].

The Mayans' rule was eventually toppled by Spanish invasion in 1523, but that didn't stop the heritage of the Mayan empire from thriving in the country, even today. Of the more than 14 million people who make their home in Guatemala, more than half of them are descendants of the Mayans [source: Enjoy Guatemala].

Much of Guatemala's history has been marked by violence. For 36 years, the country was embattled in a civil war that took the lives of more than 200,000 people. The war brought about mass murders and resulted in millions of people being run off of their land. Guatemala's civil war ended in December 1996, but the war scars still remain. Violence and intimidation are major problems in private life and in politics too [source: PBS].

Today, the influences of both the Mayans and the Spaniards are unmistakable in Guatemala. These influences permeate throughout the country's languages, customs and even the foods that are eaten. In this article, we'll look at some Guatemalan traditions, starting first with food. 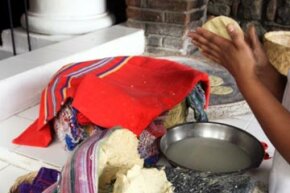 A woman makes tortillas. Tortillas are staple of the Guatemalan diet.
iStockPhoto/Thinkstock

Foods were introduced by both Mayans and the Spanish conquerors. The Mayans grew maize (corn) as their main source of food. Corn was more than just a crop to the Mayans. It was believed that when the Mayan gods wanted to create man, none of the materials like wood or clay worked well. Corn was the only material that worked, and that's why Mayans were referred to as "men of corn." Today, the majority of meals include corn in some form, most commonly corn tortillas [source: Maya Paradise].

While Guatemala was under Spanish rule from 1524 to 1821, the Spaniards introduced dishes like enchiladas, guacamole, tamales and tortillas [source: Food In Every Country]. Tortillas are consumed at just about every meal, as are black beans. In today's Guatemalan household, you'll also find that chicken, turkey and beef are the meats of choice and are commonly served in a sauce or stew. Popular dishes include hilachas, which is made with shredded meat and a tomato-based sauce, and pollo en jocón (chicken simmered in a green tomatillo-cilantro sauce).

The country's fertile land is its most important resource and coupled with the pleasant climate in Guatemala, crops from rich farmlands like sugar, coffee and cocoa are in abundance. The country is one of largest producers of the coffee in the world, and Guatemalans are very proud of that fact. Most of the coffee grown is exported.

According to the U.S. State Department, about 51 percent of the population lives on less than $2 a day; 15 percent live on less than $1 a day. That's one of the reasons you travel to many places in Guatemala and find vendors, even children, selling tortillas on the street and in markets every day just to make a living. 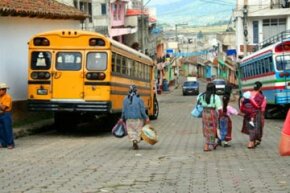 Often, when people of one culture assimilate to another culture, the traditional style of dressing can quickly become obsolete. This is certainly not the case with the descendants of the Mayans in Guatemala [source: Rutahsa Adventures]. These proud people boldly wear their traditions on their sleeves. Literally.

The native dress of the Mayans -- which is called traje -- may vary by village and language group. But the intent of native dressing remains the same: To preserve the rich culture history provided by the Mayans from days of long ago. To Guatemalans, their native costumes are their identity. There are 22 Mayan ethno-linguistic groups, which mean a wide variety of colors, emblems and styles in costumes. But bold colors like reds, blues, yellows and pinks are found on all types of dress [source: Rutahsa Adventures].

For example, in Nebaj, a town located in the Altos Cuchumatanes Mountains, the Mayan language of Ixil is spoken. The women honor their ancestors by wearing a red corte (skirt) with yellow stripes held up by a woven faja (belt or sash). The women also wear a huipil (a traditional square-cut blouse) made with embroidered designs. A shawl drapes over one shoulder, which can be used to carry a baby around. Mayan women put a lot of effort into the colorful weavings and intricate patterns of their huipils.Their outfit is made complete with an intricate headdress [source:Rutahsa Adventures].

A man from the same area may wear a chaqueta or open jacket, a locally made straw hat and Western-style sweater and trousers. The men are more likely than women to adopt some Western-style clothing as it is cheaper and more practical than the traditional hand-made garments. However, women with weaving skills are highly desired by men seeking wives [source: Rutahsa Adventures].

Even the children value the importance of preserving their historic Maya past by dressing in traje when they attend school. 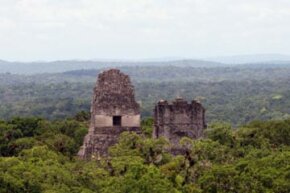 The Temple IV is the tallest structure in the Mayan region.
Hemera/Thinkstock

Guatemala is a mixture of the old and new. Guatemala City, the capital, is very modern and has many high-rise buildings, night clubs, and art galleries, while the rural areas and other pockets of Guatemala still portray an older way of life.

One of the best-known Mayan sites is Tikal, located in northern Guatemala. It's the largest excavated site on the American continent, visited regularly for its temples and vast jungles. What makes it special is that Tikal was one of the most important cultural centers of the Mayan Indians. In fact, Temple IV is the tallest structure in the entire Maya region, standing 231 feet (72 meters) tall [source: Tikal Park].

In Antigua Guatemala or "Old Guatemala", you'll find old ruins and ancient churches representing the Spanish rule. This city was the seat of the Spanish colonial government for the Kingdom of Guatemala and eventually became the most important city in Central America [source: Rutahsa Adventures]. In 1776, earthquakes forced the Spaniards to move the capital to present day Guatemala City.

Spanish is the official language of Guatemala, but many citizens still speak the languages of their ancestors. After the Guatemalan civil war ended in 1996, 24 indigenous languages (dialects of the Mayan language) were officially recognized. Even today, many people cannot speak or understand a language outside of their own.

Guatemalans celebrate the Christian holidays like Christmas and Easter, as well as their own unique celebrations. One holiday that mixes Catholic and pagan influences is the Day of the Dead ceremony. On the last day of October, altars, photographs, candles, flowers, and traditional foods and drinks are placed in Guatemalan homes to honor their deceased loved ones. The ceremony goes into the first day of November when the family members put flowers in front of their doors to welcome the souls of the dead. Afterwards, they travel to the cemeteries to lay wreathes and eat a fiambre (a special vegetable and meat dish) to honor their lost ones [source: Mundo Maya].

In a traditional Guatemalan wedding, the bride and groom are bound together by a silver rope to symbolize their union. The bride and her bridal party all wear white gowns. [Source: Worldwide Wedding Traditions]. 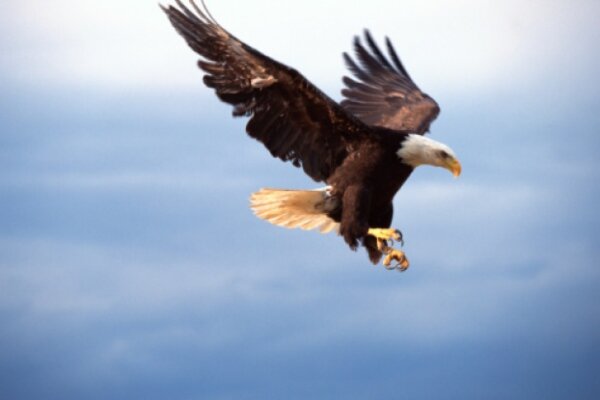 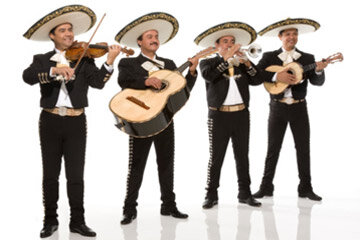 You May Like
How Mexican Traditions Work
Explore More