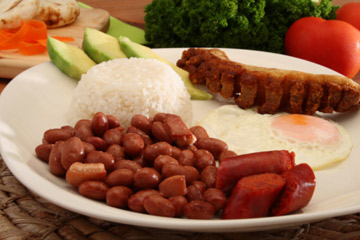 Bandeja paisa: It's got a little of everything.
iStockphoto/Thinkstock

Colombia's national dish, bandeja paisa, is so rich and satisfying that you might feel the need to unbutton your pants afterward. True to its name, bandeja paisa ("paisa platter") is generally served on a large tray (bandeja) rather than a normal-sized plate. On it, you'll find red beans and rice, ground beef, chorizo, plantains, arepa (cornmeal bread) and avocado. The entire work is topped with fried eggs and, to make the dish even more decadent, sometimes a large slice of chicharron (fried pork belly) is added. Wash it all down with a large glass of mazamorra (cold milk with crushed maize) and be sure to wear elastic-waist pants for maximum enjoyment!

Although bandeja paisa is well known throughout the country, many other Colombian dishes are regional favorites [sources: Woodward, Puerta]:

A list of Colombian food wouldn't be complete without a mention of Colombia's exotic fruits, including lulo, curuba, mamoncillo, uchuva, chontaduro,zapote and many others.

We hope you enjoyed this taste of traditional Colombian culture. If you're still hungry, satisfy your curiosity by checking out the Lots More Information section below.

No article about Colombian food would be complete without a mention of rich, delicious Colombian coffee. The dry air and rich, volcanic soil of Colombia’s mountain climates produce some of the richest and boldest Arabica coffee beans in the world. In 1959, the National Federation of Colombian Coffee Growers launched an advertising campaign designed to put a Colombian face on their coffee. Screened against a jagged mountain peak, wearing a poncho and a sombrero, Juan Valdez, a humble and fictional coffee picker, and his sidekick Conchita the Mule are still synonymous with Colombian coffee today.