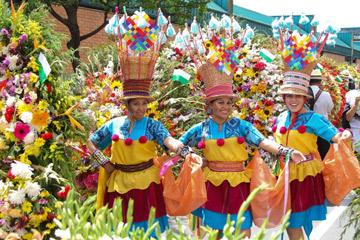 The Medellin Flower Fair is colorful, flower-y and a great place to scope out some Colombian traditions.
Victor Chavez/WireImage/Getty Images

No article on Colombian traditions would be complete without an overview of Colombia's famous carnivals. These colorful celebrations are often multiday events featuring elaborate parades, beauty contests, spirited performances and delicious regional fare. They provide the perfect forum to see, hear and experience the Colombian clothing, music, dance and food we'll be discussing in the rest of this piece. Many travel and tourism sites such as Frommers and ProExport have comprehensive lists of Colombia's major festivals. Here are a few of our favorites:

There are literally dozens of other Colombian festivals, including the Feria de las Flores (The Flower Fair) in Medellin, Carnaval de Bogotá and the Festival Nacional del Joropo. Each has its own local flavor, and you can often spot regional costumes in living color at these festivals.

Speaking of which, let's check out the traditional clothing of Colombia in the next section.