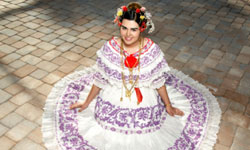 The quinceañera is an important step for many 15-year-old girls.
Peety Cooper/Stockbyte/Getty Images

In Latin American cultures, the transition from girlhood to womanhood is a special time, not only for a girl herself, but for her family and even community. Traditionally, in the eyes of Latin American communities, the 15th birthday has marked the point of a girl’s maturity. So, to celebrate this significant birthday, families throw elaborate birthday parties called quinceañeras. This is similar to a “sweet 16” party in the United States, but the quinceañera tradition has older roots and religious implications, making it more similar to a bat mitzvah from the Jewish tradition.

Curiously, scholars aren’t quite sure where the quinceañera tradition comes from. Some believe it was an adoption of a tradition brought over by the Spanish. For instance, one theory postulates that the tradition started in 18th-century Spain, when the Duchess of Alba invited teenage girls to a party at the palace and dressed them in mature adult clothes for the first time. By the next century, the Empress Carlotta of Mexico was doing the same for the daughters of the members of her court to present them as eligible for marriage. Others say the tradition is far older, stretching back to the Toltecs and Aztecs of ancient Mesoamerica [source: Stavans]. Perhaps the quinceañera was ultimately a blending of the two traditions.

Whatever the origins, the quinceañera has become very important, taking on many significant traditions as part of the elaborate celebration.