Where did the traditional birthstones come from? 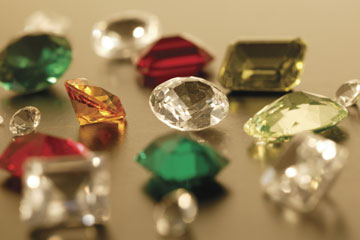 No matter where they originated, the stones that represent each individual month have special meaning to many who wear birthstone jewelry. See pictures of diamonds.
Comstock/Thinkstock

Whether it's a birthstone ring that you got on your 10th birthday, a necklace set with each of your children's birthstones, or a watch with a single birthstone gem set in the band, you've probably seen or worn birthstone jewelry over the years. But as you've admired your amethyst or ruby, have you ever wondered where birthstones came from in the first place? It's an interesting tale.

When Moses went to Egypt, his brother Aaron stayed behind in their birth town in Egypt's far east. And when Moses asked the King of Egypt to set his people free, it was eloquent Aaron who sold the idea to their kinsfolk in the borderland east. Later, Aaron became a high priest.

Aaron's ceremonial breastplate held four rows of three stones each. Exodus 28:17-20 states, "There were twelve stones, one for each of the names of the sons of Israel, each engraved like a seal with the name of one of the twelve tribes." These 12 stones also symbolized the 12 months of the year and the 12 signs of the zodiac.

It was in 15th-century Poland that wearing these birthstones gained popularity. In contrast to today's custom of wearing your birthstone throughout the year, the early mechanics of birthstone power included owning a full set of 12 and wearing each particular month's powerful stone, no matter your birthday.

For more great articles, check out the links on the next page.