Will the American Dream survive in the 21st century? 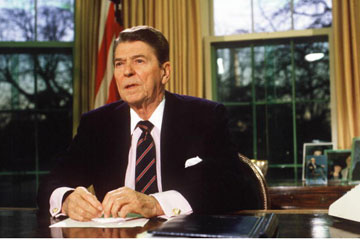 In 1980, Americans' concern about the dream's decline helped elect a U.S. President, Ronald Reagan, who promised to restore it. Reagan himself was an embodiment of the dream; the son of a humble farm family in Illinois, he'd risen to become a Hollywood movie star, a spokesman for General Electric and California governor. Reagan proclaimed that America was still a place where "everyone can rise as high and far as his ability will take him" [source: PBS].

Reagan's formula for restoring the American dream was to cut taxes, which he argued would stimulate economic growth. He also aimed to reduce government social programs, which he believed discouraged self-reliance . The economy eventually did revive, and growing prosperity helped Reagan easily win reelection in 1984. But critics also pointed to ballooning government deficits, and questioned whether cutting taxes really would revive the dream for most Americans, or only for the privileged few [source: PBS].

Congressional Budget Office data supports their case. Between 1979 and 2005, the income of the bottom 99 percent of U.S. households grew 21 percent after taxes, a rate of less than one percent a year, not enough to keep up with inflation. But during that same period, the after-tax income of the richest one percent of Americans grew by 225 percent. In 1979, the richest one percent made eight times as much as the typical middle-class family. In 2005, the richest made 21 times as much as the middle-class [source: Bernstein].

Nevertheless, the debate about how to revive the American dream has continued. Conservatives call for cutting taxes, while liberals argue for raising taxes on the wealthy to pay for programs to help lift up the rest.

Meanwhile, a third group argues that the pain needs to be spread evenly, and that Americans need to rethink what the American dream really means. In a 2008 essay, Harvard professor John Quelch admonishes that "too many Americans have been expressing the Dream through the acquisition of stuff." He urges them to see the dream as the freedom to pursue one's career ambitions, to educate our children, and most importantly, to be good citizens in our communities. That, in a sense, is a return to James Truslow Adams' 1931 definition of the American Dream as "a social order in which each man and each woman shall be able to attain the fullest stature to which they are innately capable, and be recognized by others for what they are, regardless of the fortuitous circumstances of birth or position" [source: Quelch].