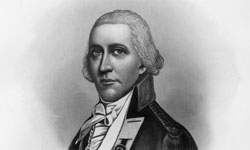 The Frelinghuysen political dynasty stretches back to the 18th century with Frederick Frelinghuysen.
Hulton Archive/Getty Images

In 1720, evangelist Theodorus Jacobus Frelinghuysen arrived in colonial New Jersey from Germany, and his family would remain in the eventual Garden State for generations to come. The Frelinghuysen clan first became involved in U.S. politics way back in 1793 when Theordorus' grandson Frederick won a Senate seat after leading American troops in the Revolutionary War and serving in the 1779 Continental Congress [source: Brown]. Since then, seven generations of Frelinghuysens have represented New Jersey on the state and federal level [source: Kitchin]. The late Peter Frelinghuysen, for instance, completed 11 terms as a U.S. Congressman, legislating from 1953 to 1975; son Rodney Frelinghuysen has represented the same congressional district as his father since 1995.

Although the Frelinghuysen line may not roll off the tongue or attract as much nationwide prestige as the Bushes and Clintons, it's certainly carries a cachet at home. Schools, streets, a township and multiple buildings around the state are named after the original New Jersey natives [source: Kitchin].