Where did the idea of 'the willies' come from? 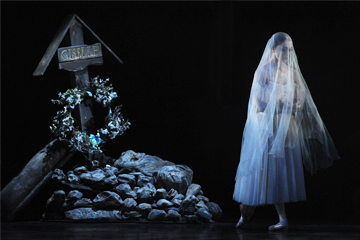 The beautiful and tragic ballet "Giselle" may have given members of the audience the willies when it debuted in the mid-19th century.
© Robbie Jack/Corbis

It could happen for any number of reasons. Maybe you notice a big spider crawling out of your empty shoe, find a hair in the food you're served at a restaurant, hear an unexpected noise in the middle of the night. Or, worse yet, suspect the noise came from a monster hiding under your bed. Whatever the cause, when your skin starts to crawl, your heart begins to pound and your senses go on full alert, you might say that you have a case of "the willies." This uncomfortable, frightened, jittery feeling is probably a familiar one. The origins of the term, however, might be foreign. How did "the willies" get its name?

Some historians point to productions of the ballet "Giselle," which debuted in Paris in the 1840s. In it, a young heroine falls in love with a man pretending to be someone else. In reality, he's a scoundrel who's already engaged to another woman. When the heroine discovers the betrayal during a passionate dance scene, she dies of a broken heart and joins the Queen of the Wilis, who is accompanied by a host of female spirits who have also been scorned. Together, these ghosts -- known collectively as the Wilis -- seek revenge upon men they encounter in the haunted woods by dancing them to death. To see the Wilis appear as apparitions on stage probably was enough to give viewers a little fright, something that eventually led to the common term "the willies" [source: Crabb].

There are a number of other possibilities for the origin of the term, though. Some suspect it was derived from early American name-calling. Children, it turns out, once called other children "willie-boy" instead of "sissy," and the concept was eventually applied to having "the willies." Other experts point to a Slavic sprite known as a vili or wili. Still another speculative explanation stems from the long woolen underwear worn by American frontiersmen. These undergarments, called "woolies," were often scratchy and irritating to the skin. This may be why we associate a jittery, prickly, "goosebumps" feeling with "the willies" [source: Alpha Dictionary].

Regardless of how the term started, "the willies" are a very real feeling for many. Whether they're caused by watching a scary movie, reading a suspenseful novel or bumping into an object in the dark, "the willies" seems to be a universal sensation.