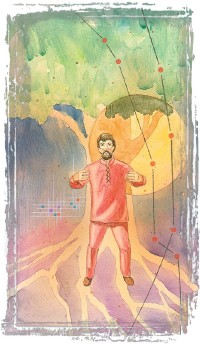 Chin energy starts at the feet, or root, of the body and moves upward.
©2007 Publications International, Ltd.

Chin energy, together with the chi and shen, forms a trinity known as the internal energies. From these basic energies, a number of other forces are generated by the tai chi practitioner. In fact, by some accounts, more than 35 distinct energies can be cultivated and used in tai chi applications. These energies are unique to tai chi, and they are applied in association with the eight elements and the five phases.

Chi is the life force found throughout creation. The ability to collect chi from the universe and to move chi throughout the body to every tissue is something chi kung practitioners and taichiists learn to do. It happens naturally, simply by practicing. In tai chi there is also the idea of cultivating shen, meaning spirit, which requires a mastery of both the emotions and the intellect.

Chin (also called jin or jing) is another force like chi and shen that can only be used ­effectively through practice. When practitioners use chin energy, they are using a substance created by the action of shen in relation to the chi. Once taichiists can move chin through their bodies, they can begin to apply it in different martial situations such as in the movements related to the five phases.

To understand how chin energy might be applied, we must first identify its characteristics. Chin is an internal force unlike the external force called li generated by the muscles. Tai chi theory maintains that li energy is related to and generated from the bones and muscles. In particular, it is related to the area of the upper body around the shoulder blades. Li is the raw yang energy taichiists try to avoid using since it is antithetical to chin energy.

Chin, on the other hand, is a special energy that is formed when the tendons and sinews around the bones are actually relaxed. This is one reason why tai chi theory stresses the importance of relaxing the many different muscle groups in the body and eliminating any unnec­essary tension.

Chin energy has often been likened to the energy that issues from the tip of a bull whip. Following a spiral movement of delivery, the energy is concentrated along an ever-­narrowing ribbon of leather until it is expressed with great force and flawless precision at the delicate tip.

Another principle difference is that li energy is the strength derived from the upper body, whereas chin is the force native to the lower body. Exactly how we are to summon chin energy and how we can direct its flow is described in this paraphrased fourth verse of Chang San-feng's Tai Chi Chuan Ching.

The root of the chin should be in the feet.

It flows upward following the legs.

Directed by the waist,

Chin is presented through the fingers.

Understanding this short verse, however, is not as straightforward as it might seem, and it has prompted endless commentaries. Interpreting it properly presupposes a certain knowledge of tai chi basics.

Root, for example, is an idea related to a special sense of balance. When a practitioner is said to be rooted, the image conveyed is one of the deep roots of a huge tree extending far below the surface of the earth. These effectively ground the taichiist, making a stable platform for the forthcoming action.

The root is related to the yongquan acupoint, which is located on one of the 12 main acupuncture channels, the Kidney Channel. The point name means gushing spring, and the imagery associated with it describes the flow of chi.

The chi is abundant at this acupoint, as indicated by the gushing water analogy. Massaging this point will encourage the flow of chi either into or out of the body, and people who visit chi kung masters often experience the chi as a breeze moving out of their bodies at the yongquan point.

As we have seen, though, chi is not chin. Chin energy does not exist unless it is created by the taichiist, and it is dependent upon the forces of both chi and shen as well. So the taichiist must first create chin by using the spirit -- shen -- and the life force -- chi.

The verse does not specifically mention that it is only at the command of the mind, known as the "I" in Chinese, that chin energy can begin to circulate. But, in fact, it is at the taichiist's mental direction that the chin is first created and then moved from its root in the feet, up through the body.

As it moves upward, the chin gains momentum, like the energy moving along the ever narrowing bull whip. When it reaches the hips, the waist begins to move at the exact moment when it can gain the most leverage. Like a pivot, it swings into the position decided upon beforehand by the taichiist.

Continuing upward, chin energy gathers yet more momentum as it moves up the spine, through the back and shoulders, along the arms, past the elbows and finally out the fingers. The entire movement is coordinated, so that each part of the body acts together with the others.

Learn about eight fighting techniques and the martial applications of tai chi on the next page.