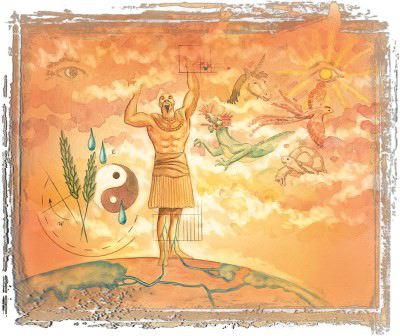 The mythological origins of Taoism have added to its spiritual and universal appeal.
©2007 Publications International, Ltd.

The meaning of Taoism is more subtle than most religions, arising mostly from mythology. It has been said that mythology is the language of the human soul. A myth speaks to us in ways ordinary language cannot, touching us subtly, almost imperceptibly. Myths speak directly to our hearts. As a result, these stories are empowering. Sometimes they enable us to perceive fundamental truths about our world and those who inhabit it. At other times, they help illuminate people's inner qualities.

The Meaning of Myth

Myths have another special quality. If we read deeply enough into their messages, we find that they sometimes describe our ancestral heritage. As well as telling a simple story, myths often have several layers of meaning. It is not unusual for these deeper layers to be concealed. Like any good secret, this quality provokes our curiosity and leads us gently into reflection on their inner meaning. The great beauty of myths, though, is that these ancient stories speak eloquently for themselves, and their meaning very often unfolds naturally over time.

This happens because myths are vehicles used to recount the common archetypal experiences of our ancestral past. The deep connection with human experience is one reason mythology is universal in its appeal. In this sense, myth is a higher language that enables the wisdom of past generations to survive the ravages of time. Myths endure for two reasons. Firstly, they entertain us. Secondly, they are accessible to all of us, regardless of our age or cultural heritage.

Essentially, though, myths provide a framework that helps us organize our thoughts on difficult matters. While these structures often appear simple enough, their content can be rich in suggestion and hidden meaning. Nowhere is this more apparent than in Chinese mythology. With a tenacity that is sometimes overwhelming, the original ideas expressed by the ancient sages in myths and legends have been preserved, clarified, and organized into entire philosophical systems.

The endless discussion, meticulous research, and absolute devotion of several thousand years of Chinese scholarship has ensured their timelessness. As a result, they now lie at the heart of many Chinese disciplines such as poetry, painting, calligraphy, the martial arts, and architecture. They are even the basis of military strategy and board games.

In the West, we most often hear myths as stories told through the spoken or written word. But the Chinese have found other ways to pass on the core ideas from their stories and traditions. Tai chi chuan, for example, is a practice that is especially dependent upon the language of movement to transmit its ideas. A particular series of movements, called a form or set, is used to encode and preserve most of the technical information associated with this art.

Although to the casual observer a form appears much like a dance, each carries within its framework all of the core philosophy passed on through myth, legend, and the secret traditions of the ages. If students learn the movements of tai chi chuan, they also unavoidably "learn" something about its underlying philosophy.

In the next section, learn about one of the most essential myths in Taoism, the mythology of creation.