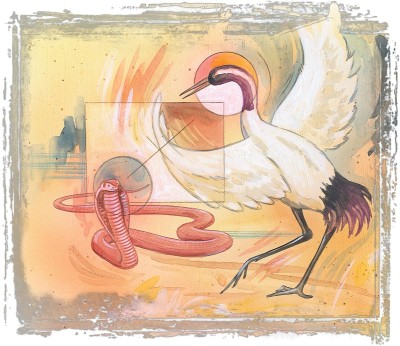 The myth of the snake and the crane exhibits the ideas of tai chi.
©2007 Publications International, Ltd.

Tai chi has many myths about its origins. One of those myths says that one day the Taoist monk Chang San-feng was disturbed by the sounds of a snake and a crane fighting in his courtyard.

Each time the crane's rapierlike beak stabbed, the flexible snake twisted out of reach. And the crane's wings, like shields, protected its long neck from the snake's striking head. According to the myth, from observing this battle, Chang San-feng developed the art of tai chi chuan, which is based on the concept of yielding in the face of aggression.

As we have seen, the images conveyed in the telling of a myth lend themselves well to the spirit and the ideas of tai chi chuan. For this reason, many myths have sprung up around the art of tai chi and its principal actors, and Chang San-feng figures prominently in many of them.

Another famous myth depicts Chang San-feng seeking the fabled elixir of life, a liquid formula that reputedly makes one immortal. One night, while in a deep sleep after an exhausting search for the elixir, the movements of tai chi chaun were revealed to him in a dream.

After careful reflection, it occurred to him that perhaps the secret of the elixir was related to these movements. It dawned on him that the idea of drinking the elixir of immortality was actually an allegory in which the set of tai chi exercises revealed in the dream represented the formula for the elixir itself.

He noted that chi in the body exhibited a number of properties similar to liquids. It flows, for example, through the many acupuncture channels. He also noted that when the chi flows in abundance, good health prevails, and when it is blocked, illness soon follows.

Like water, chi in the body can also be affected by certain natural forces, such as the gravitational pull of the moon. He finally realized that the liquid elixir could actually represent chi. By performing the movements revealed to him, Chang San-feng concluded, he would be developing chi and incorporating it into his body as an essential life- and health-giving force.

Continue reading to learn some reasons behind the creation of tai chi and to discover useful applications of the practice.