How Super PACs Will Impact the Presidential Election 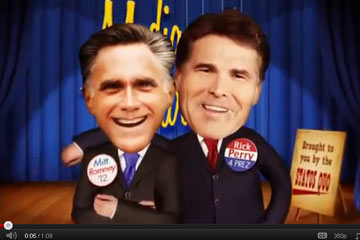 Expect to see a plethora of negative commercials like this one in the 2012 campaign. The New Revolution Super PAC produced and paid for the ad, which slams GOP presidential nominee hopefuls, Mitt Romney and Texas Governor Rick Perry, in support of Senator Ron Paul's bid for the Republican presidential nomination. See the entire commercial here.
Image courtesy of Daily Paul

It has become a common political observation that the next presidential election will be the "most expensive in history." But the 2012 election is different. The introduction of Super PACs into the contest for the White House all-but assures it will be the most expensive, if for no other reason that Super PACs allow corporations, unions and individuals to write very big checks to support a candidate.

"Super PACs allow donors who have already maxed out to their preferred candidate to make unlimited contributions to groups designed to aid that candidate's electoral prospects," says Michael Beckel of the Center for Responsive Politics. "Wealthy candidates don't have to sit on their hands after they've maxed out to a candidate; now they can open their checkbook for Super PACs."

Beckel also speculates that Super PACs may contribute to a coarsening of an already hyper-negative political process. After all, coordination between Super PACs and candidates is prohibited and if a candidate doesn't like what the Super PAC is saying, there isn't anything they can do to stop it. "[A Super PAC] may opt to take an even more negative tone than a candidate would choose to take," Beckel says. "They have the ability to say pretty much whatever they want, whenever they want, no matter how partisan or scathing."

In the race for the 2012 Republican presidential nomination, Super PACs generated controversy. In August 2011, news broke that a company -- W Spann LLC -- that contributed $1 million to the Restore Our Future Super PAC, which supported former Massachusetts Governor Mitt Romney's bid for the nomination, was dissolved soon after it was created, leading to allegations that the company was just a shell to cover the identities of donors [source: Isikoff]. Lawsuits and negative media coverage eventually led one individual, Ed Conrad, a former executive at the investment company Romney founded, to step forward and ask the FEC to amend its public disclosure reports to show him as the donor, not the company [source: Isikoff].

While it seems almost certain that Super PACs will not only lead to more controversy and a ceaseless stream of political advertisements, with Stephen Colbert in the mix, at least there should also be a few laughs.