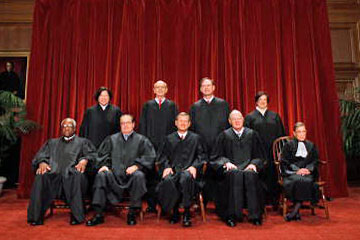 Conservative justices John Roberts, Anthony Kennedy and Antonin Scalia were among the majority that declared banning or limiting the amount of money corporations could spend on elections -- even for commercials -- was essentially limiting free speech.
Chip Somodevilla/Getty Images

Super PACs would not be possible without the 2010 Supreme Court decision in the Citizens United v. the Federal Election Commission case, which lifted prohibitions on corporate spending in elections. The case had a years-long journey to arrive at the high court and had its roots in a conservative group's displeasure with Michael Moore's documentary, "Fahrenheit 9/11," which was highly critical of former President George W. Bush's handling of the 2001 terrorist attacks on the United States.

In 2004, the conservative non-profit corporation Citizens United filed a complaint with the FEC saying that commercials for Moore's film violated the Bipartisan Campaign Reform Act of 2002 -- better known as the McCain-Feingold Act -- which prohibited corporations and unions from funding TV ads advocating for the victory or defeat of a candidate within 30 days of a primary or 60 days of a general election. The FEC dismissed the complaint.

During the 2008 primary, when then-Senator Hillary Clinton was running for the Democratic presidential nomination, Citizens United produced a political documentary titled "Hillary: The Movie," which was highly unflattering of the former First Lady. The group also attempted to buy airtime for ads touting the film, but in January of 2008, a U.S. District Court ruled that the advertisements violated the McCain-Feingold Act. Citizens United appealed the ruling of the District Court and the Supreme Court took up the case and heard arguments in 2009.

The Supreme Court's decision was announced in early 2010 and was one of the most contentious in recent history. The court split largely along ideological lines, and ruled 5 to 4 in favor of the notion that the government cannot place restrictions on election spending by corporations [source: Liptak].

As the slim majority deciding the Citizens United case indicates, this was, and continues to be, an extremely controversial issue. In the past, the Supreme Court had upheld various legislative efforts to control corporate spending in campaigns. The Citizens United case overruled former rulings such as Austin v. Michigan Chamber of Commerce and part of McConnell v. The Federal Election Commission, both of which upheld the McCain-Feingold Act and maintained efforts to staunch the flow of corporate cash into elections [source: Liptak].

With the new interpretation of the Constitution, the majority justices, including conservatives Chief Justice John Roberts, Anthony Kennedy and Antonin Scalia, declared that banning or limiting the amount of money corporations could spend on elections -- even for commercials -- was tantamount to limiting free speech [source: Citizens United v. Federal Election Commission].

The reaction to the Citizens United case was, by and large, partisan in nature. President Barack Obama, a Democrat, criticized the ruling, calling it a big victory for oil, insurance and Wall Street corporations that would help them "drown out the voices of everyday Americans." Many conservative Republicans, however, cheered the ruling as a validation of the Constitution's protection of free speech.

Keep reading to find out how many Super PACs there are and whether their existence favors Democrats or Republicans.