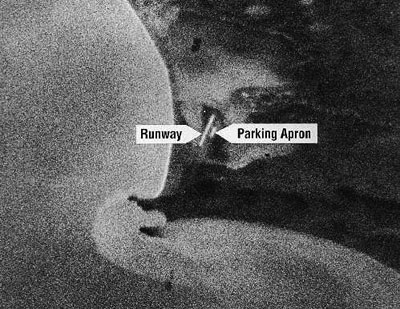 This shot of Mys Shmidta Air Field in the former USSR is one of the first images taken by the U.S. spy satellite CORONA in 1960.
Photo courtesy National Reconnaissance Office

­Methods of acquiring information are as varied as the information as itself. The most important element of a long-­term spying operation is the use of a cover and the creation of a legend. A cover is a secret identity, and a legend is the background story and documents that support the cover.

For example, a British agent whose cover identity is a Russian accountant would need to speak Russian and know a great deal about Russian financial laws. To make the cover seem more realistic, the legend must be very thorough. The agent will have a fake life history that he must memorize. Where did he go to school? Does he have a diploma to prove it? Where was he born? Who is his ex-wife? What are his hobbies? If the legend states that the agent enjoys fishing, he'd better have some fishing gear in his house. The failure or success of spies can hinge on such seemingly minor details.

Once the spy establishes a cover, he might spend years doing his job and establishing trust. Eventually, the spy will try to gain promotions or transfers to a position with access to vital information, or befriend someone with such access.

It is possible for a spy to memorize information and pass it on to his controller. However, it is much more reliable to photocopy papers and maps, often transferring the data to a tiny slip of microfilm or a microdot. Stealing original documents could blow the spy's cover, so a wide assortment of miniature cameras hidden in innocuous objects are used. For more details on these devices, check out How Spy Gadgets Work.

There are numerous technological ways for countries to spy on each other without ever sending an actual spy to collect information. Satellites equipped with cameras have been tracking the positions of military units since the 1960s. At first, the satellite would drop a bucket with the film inside over the ocean. In 1970, digital film technology was first developed, allowing the satellites to transmit the photographic data by radio. Today's spy satellites can take photographs with a high enough resolution to read the headline on a newspaper.

It was more difficult to get that kind of accuracy in the '60s and '70s -- spy planes such as the U-2 had to fly directly over enemy territory, exposing the pilot to the risk of being shot down, and the spying nation to the risk of international embarrassment.

CIA official Aldrich Ames began spying for the Soviets in the 1980s for a variety of reasons, but mainly because he was heavily in debt and needed money. Ames was a walk-in -- he came up with a plan to sell the names of Soviets who were working for the CIA, and went to the Soviet embassy in New York City to do it. He reportedly demanded $50,000, and continued to spy for money for several years. At least three people were executed by the USSR as a result of Ames' spying.