by Robert Valdes
NEXT PAGE 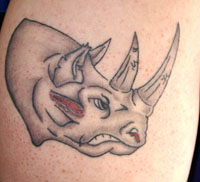 A traditional tattoo. Neither Singer nor Pinter would let us photograph their animated tattoos, but we do have photos of the technology behind them.

Tattooing is one of the oldest forms of body modification known to man. These days, getting a tattoo is a much safer and more standardized procedure then it once was. Modern tattoo artists use a tattoo machine (which is like a small, handheld sewing machine gun) to do the work.

The tattoo machine has remained relatively unchanged since its invention in the late 1800s. In fact, outside of improvements in safety and sterilization methods, there really haven't been any great leaps forward in tattoo technology. That is, of course, until the recent introduction of the animated tattoo.

Animated tattoos are just what they sound like -- implanted images that actually move under the skin. HowStuffWorks got to examine this technology closely and talk to Jay Sean Singer and Carl A. Pinter, the people who created it.

In this article, we'll explain the hardware behind animated tattoos, learn how they are implanted in the body and discuss some of the safety issues associated with animated tattoos.

The technical name for an animated tattoo is Programmable Subcutaneous Visible Implant, or PSVI. The PSVI is a small, specially-made LCD implanted into the skin and used to display pre-programmed images. LCDs, or Liquid Crystal Displays, are used in a number of everyday things like TVs, computer monitors and digital watches. Jay Sean Singer, the man who brought PSVI to life, has altered this common technology so that it can be used to display simple, one-color, animated images from underneath the skin.

PSVI tattoos have two major advantages over traditional tattoos. The most obvious advantage is that they are animated, bringing body art to a whole new level. The second advantage is that while the implant surgery is fairly permanent, the images are not. Because PSVIs are programmable, a person with a PSVI tattoo can change the image whenever they like by simply having their tattoo "reprogrammed."

Now let's look at each of these components closely and see how they work together to make animated tattoos.

Kentucky native Jay Sean Singer has a life-long passion for tinkering with electronics. The son of an electrician, Singer's first gadget was an alarm system he built to keep people out of his father's tool box. The amazing thing is that Jay Sean was only six years old when he built it!

It took Singer three years to build the first successful animated tattoo prototype. However, Singer did not actually patent the idea. The idea for PSVI was patented by two other men nearly seven years before Singer ever even thought about trying it. Singer explains, "You really can't fabricate the device with the information in that patent. Obviously if you could, these two cats would have already done it. They may have thought of it, but I made it a reality..."

Singer's early concepts for an animated tattoo involved a design that was similar to a Magna Doodle. "I was going to carve channels into the flesh and have these magnetic particles held in a liquid suspension. You'd shake your arm to make that tattoo move...yeah, I know it's stupid."