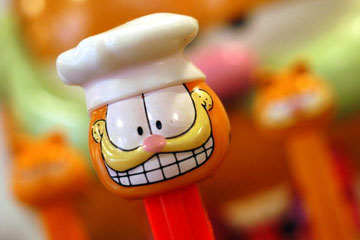 Countless commemorative souvenirs were created to honor the 2011 wedding of Great Britain's Prince William and Kate Middleton. But perhaps the most distinctive was a set of specially made PEZ dispensers with tiny plastic busts of the Royal couple, which fetched a princely sum of $13,360 at a charity auction. Amazingly, that isn't even the highest price paid by a collector for a PEZ dispenser; that honor goes to a limited-edition astronaut-themed dispenser that sold for $32,000 in 2006 [source: Reuters].

There's just something about PEZ, a peppermint candy that originated in Austria in the 1920s, and the odd little plastic statues it comes in -- usually likenesses of cartoon characters and costumed superheroes. Children are entertained when they push the triggers and figurines spew out tiny bricks of candy, like hens laying eggs. For Baby Boomers who grew up in the 1950s and 1960s when PEZ became a candy-store fixture, those little dispensers are a treasured bit of nostalgia. And to highbrow connoisseurs, the tiny polystyrene homages to pop culture icons are wonderful examples of American kitsch. But no matter what brought you to PEZ, you'll no doubt find "it is impossible to hold that little giraffe or Winie-the-Pooh or cowboy dispenser in your hand without tipping back the head and pushing the candy forward," wrote Susan Kahn and Nina Chertoff in their book "Celebrating PEZ" [source: Kahn and Chertoff].

Our collective obsession with PEZ manifests itself in numerous ways. Enthusiasts hold annual PEZ conventions, avidly read publications like PEZ Collectors News, and eagerly bid for prized and/or rare PEZ figurines in Web auctions. In fact, Silicon Valley entrepreneur Pierre Omidyar says he was inspired to found the phenomenally successful online commerce site eBay in part by his wife's hobby of collecting PEZ dispensers [source: Lacy]. In the 1990s, PEZ mania even spread to the media and political worlds: The popular TV comedy "Seinfeld" aired an episode in which a Tweety Bird PEZ dispenser figured into the plot, and a Chicago Tribune columnist derided then-President Bill Clinton as a "PEZ dispenser of government programs" [source: Balz]. Today, there's even a tourist attraction devoted to PEZ, the Burlingame, Calif., Museum of PEZ Memorabilia [source: PEZ Museum].

In this article, we'll look at the nuances and allure of PEZ collecting, and tell you more about the PEZ museum. But first, let's take a look at the history and development of PEZ.

Eduard Haas III, the Austrian confectioner who dreamed up PEZ, was born near Vienna in 1897. He first became successful in the family grocery business by peddling a new brand of baking powder that made cakes lighter. But in the mid-1920s, young Haas had an inspiration of his own. He bought peppermint oil from a chemist and used it to create tiny, sugar-based candies that he shaped like bricks to make them easier for a machine to wrap. The candy's name, PEZ, was an abbreviation of "Ppferrerminze," the German word for peppermint.

Haas' new candy caught on in Vienna, and after World War II, the inventor looked for ways to broaden his market. He settled on the idea of marketing his peppermints to smokers who were trying to quit -- or, if they couldn't resist puffing away, they could use PEZ to freshen their breath [source: MIT.edu]. To that end, one of Haas' employees, Oscar Uxa, designed the first PEZ dispenser, which was meant to resemble a cigarette lighter [source: PEZ.com].

PEZ became a hit among cigarette-craving adults in Europe, with the help of sexy "PEZ girls" the company used in its advertising. But when Haas started selling the candy in the United States in 1952, he was surprised to discover that it seemed to appeal mostly to American children. In 1955, he altered his marketing strategy; he created new fruit-flavored PEZ and put the heads of characters like Santa Claus and Popeye atop the dispensers. The repurposed candy and dispensers became an immediate hit, and the company soon followed with dispensers featuring popular children's TV figures like Bozo the Clown and Casper the Friendly Ghost.

In 1970, Haas, by then a wealthy man, sold the company, which continued its phenomenal success by coming up with innovations like interchangeable heads, and feet that stabilized the dispensers so they could stand upright [source: MIT.edu]. The company also made a mint with dispensers based on characters like Darth Vader, Yoda and Chewbacca from the "Star Wars" films [source: PEZ.com]. Today, Orange, Conn.-based PEZ Candy Inc.'s products are sold in more than 80 countries across the world, and more than 3 billion of the candies are consumed in the United States alone annually [source: PEZ.com].

Next, we'll look at how PEZ dispensers became a collectors' favorite.

Where does PEZ come from?

Today, PEZ dispensers are manufactured in plants in China and Hungary, but the candy itself is still made at the PEZ Candy Inc.'s plant in Orange, Conn.

Kids have been collecting their favorite PEZ dispensers for decades, and today, with many of them still available at affordable prices -- a new Buzz Lightyear or Darth Vader can be had for less than $5 -- it's possible to begin a collection with allowance money or by taking out a surreptitious loan from Dad's spare change dish.

But there are also plenty of adults hooked on PEZ dispenser collecting. The hobby really took off in the 1980s, and in the decade that followed, PEZ enthusiasts began to publish guidebooks and a newsletter, PEZ Collectors News, and hold annual conventions [source: Kahn and Chertoff].

Vintage, rare and special-edition PEZ dispensers go for prices in the hundreds or even thousands of dollars, but compared to other sorts of collectables, they're relatively cheap. Additionally, the PEZ company, which had roughly $50 to $100 million in 2009 sales, regularly comes out with new designs, based upon everything from Hello Kitty and the latest Disney animated characters to the colors and logos of major-league baseball and college sports teams [source: Pacyniak]. So there's an ever-expanding assortment for PEZ-heads to covet.

While PEZ collecting may seem like a humble pastime, the collectors that scrutinize the tiny plastic figurines have an eye for detail that might put some art historians to shame. Savvy collectors know that there are seven different components to a PEZ dispenser, and that older, more valuable vintage dispensers made before 1963 have metal, rather than plastic hinges, and no feet [source: Popapez.com]. They also know that among the more than 450 kinds of dispensers that have been issued since 1955, there are three different versions of Santa Claus, including a full-body version issued in 1955, and there's a Salvador Dali-esque 1968 "Psychedelic Hand" dispenser with a hand that clutches a green eyeball [sources: Popapez.com, Pez.com, Pez.com]. They're familiar with the "Bride" and "Stewardess" dispensers, both issued in 1975, and they're aware that the special limited-edition "Orange County Chopper" gift set, issued in 2006, is the first ever to feature living people [source: PEZ.com, PEZ.com]. They also know about the PEZ Museum, which we'll address on the next page.

PEZ as a health food?

In the 1980s, PEZ briefly experimented with a sugarless candy fortified with Vitamin C. But that idea quickly faded away, and then-company president Scott McWhinnie told the Associated Press in 1984, "We're in the kids' candy business. We'll leave the vitamin business and health food business to others" [source: Dahl].

PEZ dispensers are such a curious bit of Americana that back in the late 1980s, the Stamford, Conn., Museum and Nature Center featured an assortment of them prominently in an exhibition, "People and Their Collections." The show was even written up in by a New York Times critic, who felt compelled to explain to readers that the dispensers "were brightly colored plastic items about the size of a cigarette lighter … crowned by the heads of Mickey Mouse, Popeye and other cartoon celebrities, which snap back in order to eject the candy" [source: The New York Times].

Since then, however, PEZ dispensers have gained their own unofficial shrine, the Burlingame, Calif., Museum of PEZ Memorabilia. The museum, which is not affiliated with the company that makes PEZ, was established in the 1990s, when, in a spirit of whimsy, a computer dealer named Gary Doss and his wife Nancy began displaying PEZ dispensers between electronic wares. Pretty soon, the PEZ dispensers were getting more attention than the computers, and the Dosses gradually converted their entire shop into a mecca for PEZ heads. Twelve thousand visitors a year, some from as far away as Japan and Australia, pay admission to marvel at the impressive collection of rare dispensers, including a rare pineapple-wearing-sunglasses dispenser that took Gary Doss 12 years to find and cost him $3,000 to obtain. Also on display are assorted PEZ-branded items, from vitamins to vending machines, and a sign from the original PEZ factory in Austria. There's also an outsized replica of a PEZ snowman dispenser that stands nearly 8 feet (2.4 meters) in height and is capable of holding 6,480 of the candy bricks at a time [source: Levy].

For more on food and food trends, visit the links on the next page.

Who's Who in PEZ Dispensers

Over the years, hundreds of PEZ dispensers have featured a wide variety of characters, including Bugs Bunny, Peanuts and Flintstones characters, superheroes like Batman and Spider-Man, Star Wars figures, animals and Santa Claus. But only a few have ever depicted real humans. In addition to the 2006 "Orange County Chopper" set and the 2011 dispensers honoring Prince William and Kate Middleton, in 1976, the company released several dispensers based on deceased historical figures -- flag-maker Betsy Ross, frontiersman Daniel Boone and Revolutionary War hero Paul Revere [source: Snopes.com].