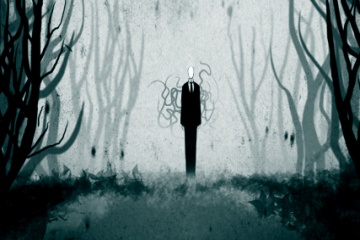 With all of the creepy elements that make up his mythology, it's little wonder Slender Man has attracted such a following.
CottonValent/DeviantArt/CC BY 3.0

The woods. Long before Little Red Riding Hood set off for her grandmother's house, we loaded that dark, damp place with our fears. Full of brambles and beasts, the woods are where we get lost, where we stumble upon gingerbread houses, witches, werewolves, vampires and child-snatchers.

So, start with some woods and add a bogeyman. Everybody loves to fear a bogeyman. Let's make him faceless for universality and added creepiness. Make him tall and weirdly skinny and give him long, tentaclelike arms to up the ante. So, somewhere in the fearful woods there's a thin, faceless bogeyman with long, long limbs who lures children to him. Once he gets them, they're gone forever.

So far, so good. The plot is familiar. Now add two more crucial ingredients: Photoshop and the Internet. Mix all these elements together and you've got a cultural phenomenon — a nightmare figure appearing in multiplying stories by multiple authors. "Authentic" vintage photographs document his existence somewhere on the blurry border between fiction and manufactured reality. And that border blurs so much, the bogeyman begins to creep into the real world. This is Slender Man.