Why were women on ships considered bad luck? 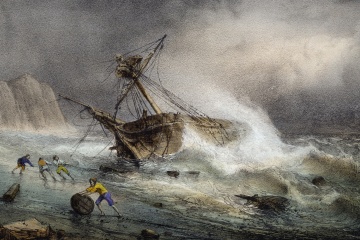 Sailors believed the presence of women aboard a ship would anger the sea gods and cause rough waves and violent weather.
De Agostini / A. Dagli Ort/De Agostini Picture Library/Getty Images

Sailors tend to be more superstitious than the rest of us. The long list of nautical legends, folklore and superstitions may seem odd to us landlubbers, but when your profession exposes you to the elements and uncontrollable natural disasters, you're better safe than sorry. Good luck charms and omens of bad luck pertaining to sailing, boats and sailors have endured for centuries. Check out a few examples:

Women in sailing days of yore never even got a chance to practice these superstitions — an old nautical superstition held that women on ships or boats were very bad luck. Women were historically forbidden from sailing on military vessels or merchant ships because captains believed their presence would anger the sea gods, who would cause rough waves and violent weather. An alternate explanation might have been that bringing a woman on an extended sea voyage could be extremely, let's say, "distracting" to the all-male crew — and probably cause problems for the woman as well. A distracted or jealous crew is an unsafe crew. Sometimes women would even disguise themselves as men in order to work on a ship.

Author Suzanne Starks writes of an incident in the Middle Ages where a crew defied this superstition and went out to sea with several female passengers on board. The ship hit a terrible storm, and the crew, remembering that women were bad luck, began throwing all the female passengers overboard. More than 60 women drowned in the men's attempt to appease the sea gods. All was for naught, as the majority of the crew perished anyway [source: PortCities Southampton].

Here's an interesting (and somehow unsurprising) contradiction — although sailors believed a woman on board would anger the sea gods, they also believed a bare-chested woman calmed the seas. A topless woman would "shame" nature into suppressing its anger. And, oddly enough, even though they were believed to be bad luck on the boat, women were also thought to be excellent navigators. This is why you still see topless women figureheads with their eyes wide open on the prows of boats and ships.

The ban on fully-clothed women on boats has, fortunately, faded over time. Today, women are welcomed aboard, and many put their excellent navigation skills to use by captaining their own boats and ships.