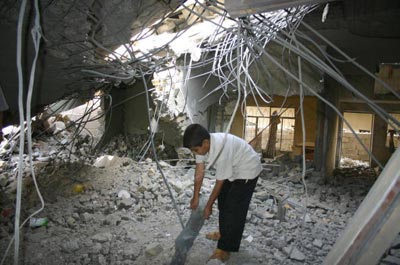 Three people died in this building after a U.S. air raid on what the military said was a suspected safe house for foreign fighters in the Iraqi rebel city of Fallujah.
Fares Dlimi/AFP/Getty Images

A safe house can be one of many things -- the home of a friend who willingly supports and sympathizes with whatever covert activities you might undertake; the home of someone who can be bribed, tricked, blackmailed or forced into offering their home for refuge; or a home, apartment, hotel room, business or other location for rent.

There are usually two types of uses for safe houses: defensive and offensive. A defensive safe house is one that hides people and keeps them safe from investigation, capture or surveillance. For example, after Danish newspapers published pictures of Muhammad in 2006, several of the cartoonists went into hiding because of death threats from offended Muslims [source: New York Times]. An offensive safe house, on the other hand, would serve as a place for people to conduct covert operations. An apartment rented by CIA spies could serve as an offensive safe house if they were running surveillance on a member of the Mafia.

Of course, regardless of the reasons for using a safe house, keeping the location and any activities within or without the house secret is the most important part. Once a secret location is no longer secret, the person in hiding must pick up and find another safe house or risk detection. Constantly moving around makes any operation difficult, so there are several basic requirements that define an effective safe house:

For lots more information on espionage, see the next page.

A Safe Place to Eat

Although "Your Safe House," a landmark spy-themed restaurant in Milwaukee, Wis., might not be the best place to go if you're running from the law, it'll probably work if you're hungry and looking for something to eat. The restaurant has served Crafty Concoctions (drinks), Incredible Appetizers, lunch and dinner to "agents" since 1966. "Private meetings" and "special missions" (parties for large groups or company gatherings) are held in Banquet Rooms with names like "Indoctrination and Orientation Room" and "The Newsroom."