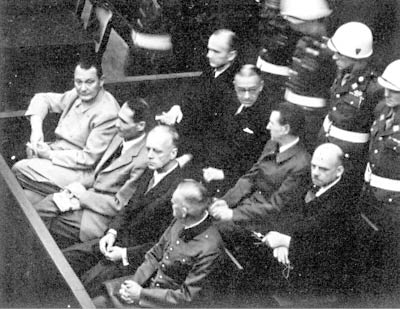 Before discussing the penalties of violation, we should define to whom these regulations apply. As it turns out, defining the subjects of the rules of war is somewhat difficult.

It is understood that the conventions apply to the armed forces of all nations that have ratified the conventions. But this is not the final word. The Hague documents state that the laws apply "not only to armies, but also to militia and volunteer corps" that:

It is this last condition that makes defining the application of these laws a bit tricky. Within the context of the member states, all official armies and all non-official armies that meet the requirements listed above must adhere to the rules and are protected by the rules; but one of the requirements listed above is adherence to the rules. So it seems that the conventions apply to the forces that follow the conventions.

Both the Hague and Geneva Conventions address the subject of penalization, but neither states specifically the manner in which a violator should be tried and punished. The first Geneva Convention calls on the Contracting Parties to "enact any legislation necessary to provide effective penal sanctions for persons committing, or ordering to be committed," any of the following violations:

...willful killing, torture or inhumane treatment, including biological experiments, willfully causing great suffering or serious injury to body or health, and extensive destruction and appropriation of property, not justified by military necessity and carried out unlawfully and wantonly.

Financial retribution is specifically mentioned in the Hague Conventions, and in both, imprisonment is implied in statements regarding the necessity of a fair trial. It is pretty much left to the accusing nation(s) to declare a violation of international law and set up war crime trials, which is generally accomplished through the United Nations.

The International Court of Justice (also known as the World Court) in The Hague is a standing body that hears international disputes. In May 1999, Yugoslavia submitted a suit to the World Court alleging that NATO's bombing of the country "amounted to illegal aggression and genocide." The Court ruled against Yugoslavia, declaring that the bombings did not constitute genocide (International Court of Justice Ruling). The Court ruled in February 2002 that a Belgian court was not allowed to try Congolese foreign minister Yerodia Ndombasi for war crimes because he had diplomatic immunity in that country (Crimes of War Project).

Following World War II, an International Military Tribunal was established to try Nazi war criminals. The United States, France, Russia and Great Britain were the prosecuting nations in the Nuremberg Trials, and there were 22 defendants -- one who was missing and presumed dead -- charged with violating the laws and customs of war and crimes against humanity.

Three defendants were acquitted, eight were sentenced to prison and eleven were sentence to death. To learn more about the Nuremberg Trials, see Court TV: A Look Back at Nuremberg.

The International Criminal Tribunal for Yugoslavia was set up in 1991 by the U.N. to try leaders of the former Yugoslavia accused of violating International Humanitarian Law. In total, more than 100 people have been indicted for crimes including genocide, crimes against humanity and violating Hague law, including specific charges for rape. Twenty-five of the accused are still at large, and these proceedings are still being conducted. So far, the court has handed down sentences ranging from five to 50 years in prison, to be served in various countries. For more information, see United Nations: ICTY at a Glance.

For more information on the international rules of war, humanitarian law and related topics, including specific war crimes trials, check out the links below.