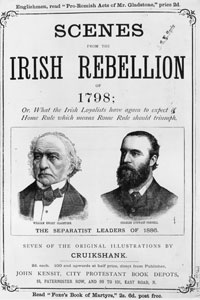 A page excerpted from a propaganda book about Protestant persecutions during the Irish Rebellion of 1798.
Hulton Archive/Getty Images

Now that we've got a handle on propaganda techniques and mediums, let's look at a few types of propaganda.

Political propaganda has been around as long as there have been politicians angling for votes and public approval. Although the term propaganda wasn't coined until 1622, similar techniques of persuasion were employed regularly throughout history. The Bible recounts the story of how an Assyrian King used fear propaganda in an effort to persuade the Kingdom of Judah to surrender to him [source: History.com]. Julius Caesar is said to have penned the "Gallic Wars" for the express purpose of furthering his career, increasing his power and broadening his reputation [source: History.com]. Today, political propaganda is commonly used to recruit and retain voters via a seemingly endless stream of television commercials. Sometimes these commercials depict only the best qualities of the candidate shown, while other commercials utilize name-calling, fear and other techniques to discredit opposing candidates or ideas. The glittering generalities technique is also common in political propaganda, as are political cartoons.

As we've already learned, religious propaganda was actually the first official type of propaganda. Missionaries have been working for centuries to recruit others to their respective faiths, whether it's through face-to-face communications, pamphlets, posters or broadcast media. Religious propaganda is also used to spread the word about particular moral and ethical issues, including abortion and the controversy over religion in schools.

Cults use extreme propaganda to influence people into accepting particular beliefs, often through methods of thought reform. This type of brainwashing is what convinces people that it's a good idea to drink the poison Kool-Aid or commit ritualistic murders (For more information on cults see How Cults Work).

A church stands in an abandoned village in the Congo, a testament to mission work in Africa.
Christopher and Sally Gable/Getty Images

No matter the type of propaganda, it's pretty much all impossible to avoid. The simple truth is that few organizations, politicians or religions are going to voluntarily disclose information that disputes their beliefs and goals. To be truly informed on any given topic, it's necessary to do background research using credible, reliable sources.

Only after studying all of the key components of a piece of propaganda (such as who's paying for the message, which organization or person created the message and what words and images are working to play on your sentiments and sympathies) can a person sincerely make an informed decision about whether the message is true or has a covert agenda.

­When it's a piece of government propaganda, however, it's another story. According to Vanderbilt University professor Mark Wollaeger, Ph.D., the use of government funds to push propaganda has been illegal in the United States since 1951. But it wasn't until 2005 that the George W. Bush administration signed the "Stop Government Propaganda Now" bill into law. The bill was created due to some outright acts of propaganda committed by government agencies, such as paying television reporters to skew their messages. The bill requires all audio and printed press communication releases to state clearly the government agency that funded its creation and dissemination. Under this law, it's illegal to manipulate the news media financially.

Be aware that propaganda laws and regulations vary from country to country, and some nations have no formal propaganda policies at all.

Next, we'll take a look at the famous propaganda generated by World War I and World War II.­

Sometimes, entire books are pieces of propaganda. Communist thinker Karl Marx penned "The Communist Manifesto" to spread his ideas of utopia (a perfect society) and how it can be achieved through communist government. Another famous example is Harriet Beecher Stowe's novel "Uncle Tom's Cabin," which depicts the atrocities of slavery in the American South.