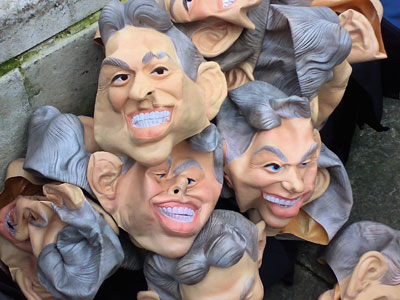 Rubber Tony Blair masks are discarded in London after being worn to promote the TV show "The Trial of Tony Blair." These masks' exaggerated features are clearly a caricature of the former prime minister.
Scoopt/Getty Images

Propaganda is communicated through a variety of outlets, including television, film, radio, the Internet and print communications (which include brochures, posters and newspapers). According to Professor M. Lane Bruner, broadcast propaganda -- communicated through television, radio and film -- is the most dangerous kind. These messages are developed and broadcast by producers, directors, writers and news anchors or disc jockeys whose personal beliefs creep into ideas that are viewed and heard by a massive audience. Since the audience has little or no opportunity to respond or provide feedback to these messages, they become fact in the minds of many. "Furthermore," Bruner says, "given the wide range of choice of programs, people oftentimes only tune in to the programs that reinforce their own beliefs" [source: Bruner interview].

There are some propaganda and media critics who claim that all broadcast media contains propaganda in some form or another. Bruner points to reality television shows, which emphasize social values such as greed or winner-take-all attitudes, thus influencing the audience that these attitudes are the norm. Even television shows such as "The West Wing" and "The Daily Show" can blur the lines between fictional scenarios, comedy and serious politics. "The more serious news becomes a joke, the more comedy news becomes serious," Bruner hypothesizes.

Supporters of the Islamic party Jamiat Ulema-i-Islam protest the depiction of Mohammed in political cartoons in 2006.
John Moore/Getty Images

Print propaganda is often communicated in the form of newspapers, magazines and posters -- especially through political cartoons and caricatures. While cartoons and caricatures stir up conversation about a given topic, they can also be misappropriated to escalate tension between opposing groups. For example, a caricature in "The New Yorker" of 2008 presidential hopeful Barack Obama and his wife Michelle reinforced persistent African-American stereotypes. And when a Danish newspaper published political cartoons with images of Mohammed in 2006, tensions were ignited between Muslims, who considered the images sacrilegious, and members of the European press. The cartoon raised the question of whether or not propaganda is permissible by free speech. Bruner says yes, it is: "Basically, most propaganda, as long as it does not transgress the current legal limitations on speech, is protected speech" [source: Bruner interview].

Another medium for propaganda is the Internet. The Internet disperses broadcast and print propaganda on a worldwide scale; however, it's a medium that provides audiences the chance to exchange ideas, discuss information and research the topic at hand. On the flip side, the Internet enables the widespread dissemination of unchecked information, which can lead to the formation of uninformed opinions.

Of all these propaganda mediums, one of the most recognizable is radio. Radio relies more on repetition of the message simply because it doesn't have the powerful visual tools at its disposal that print and other forms of media do, according to Vanderbilt University professor Mark Wollaeger, Ph.D. Propaganda typically uses music and images to elicit an emotional response, but it's designed in such a way that audiences don't realize they're being manipulated by experts like "speech writers, marketers, spin doctors and spokespeople" [source: Bruner interview]. Because of this, it can be very difficult for the untrained eye to spot propaganda. And that's the hallmark of propaganda: persuasive messages that win over unwitting people. On the next page, we'll discuss some popular types of propaganda.