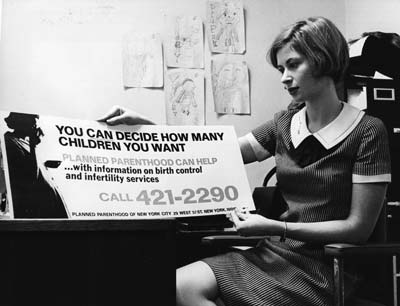 In December 1967, birth control information, which was to be displayed on New York buses, is held up for scrutiny by Marcia Goldstein, the publicity director of Planned Parenthood.
Photo by H. William Tetlow/Fox Photos/Getty Images

You might be surprised to learn that not everyone thinks a growing human population is a bad thing. In fact, some people think we're facing the opposite problem -- that our population isn't growing fast enough and might start shrinking.

How can that be? The simple answer is: birth control. Since the 1960s, when birth control pills became widely available to women in industrialized nations, the rate at which the world's population grows each year has dropped steadily [source: World Population Growth Rates]. This is becoming a problem in some countries, particularly if their population has been reduced by other factors such as disease or war. Russia is planning a program that would pay women cash grants for having children. Australia, Japan and several other nations have similar programs [source: New York Times].

­Why would a shrinking population be a bad thing? Wouldn't it be better if we used fewer natural resources and did less damage to the environment? It probably would be better in some ways. But it's also important to have a healthy world economy, and continual worldwide economic growth is largely fueled by population increase. People are consumers. More consumers equals more money. More money equals a healthier economy. ­

Population loss isn't a worldwide problem. There are plenty of humans, overall. It's only a problem in certain places where external factors have driven down the population. In these places, the population might get so low that it suffers from population collapse. This is the point at which the population is no longer large enough to support a functional economy. Any people that are left simply leave if they're able. Those who are too poor to move end up living in extreme poverty.

­One argument says that population decline is a problem because the wrong populations are declining. This line of thinking states that wealthy, educated Europeans, Americans and Asians are more likely to have fewer children and have better access to effective birth control. These populations are shrinking while poor people in Third World countries seem to be reproducing rapidly. Is there any validity to this argument?

It's true that people in industrialized nations tend to have fewer children and have them later in life, and they do have better access to birth control. However, a child born in the United States will consume an enormous amount of resources and generate tons of pollution in his or her lifetime. A child born into a very poor country will use a tiny fraction of these resources, leaving a much smaller ecological footprint.